A Book and a Chat with Carole Eglash-Kosoff 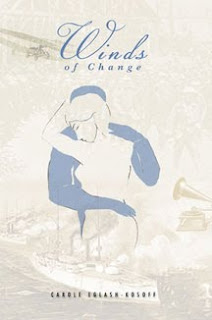 The year has flown by or so it seems, with 155 shows shared with the listeners through the year. Carole Eglash-Kosoff was a previous guest back in July where she shared with us all about her second book, just released called When Stars Align, a historical novel set in the late 19th Century in Louisiana, a time in which the Civil War and the nation's view of slavery were in turmoil. She writes about a taboo interracial relationship in the Deep South. It unveils how slaves, like Rose and Faris, were treated by their slave owners, Jedidiah and Ruby Rogers.

Carole joined us once again on tonight’s “A Book and a Chat” to share with us what she has been up to since the last show, which being Carole has of course meant travelling and about her new book “The Winds of Change”.

This book carries on with the next generation of folk from “When Stars Align” taking the reader through a tumultuous time in American history.

About "Winds of Change":

Winds of Change is a whirlwind novel of bi-racial love set against those forgotten decades that include the Spanish-American War, the San Francisco earthquake, and World War I. It deals with segregation and injustices to Southern black and white communities during the post Civil War period when old attitudes persisted and interracial love led to disastrous consequences. The racially charged love and conflict of the critically acclaimed When Stars Align have become more entrenched. Josiah, Bess, and Stephen discover facts about themselves that refute everything they believed regarding both their parents and their racial background. Loves are thwarted as they each struggle with echoes of their past.

It is a tumultuous time in American history that includes the inventions of airplanes, automobiles, telephones and movies, amidst decades of lynchings and economic turmoil. Racial biases complicate lives and relationships as newly arrived immigrants vie with white and Negro workers all trying to gain a piece of the American dream. It is a socially relevant, historically accurate, saga of decades often overlooked in American history. Winds of Change follows the next generation from those we came to know in When Stars Align

Winds of Change is a soaring historic fiction novel that stands alone but follows the next generation from those we came to know in When Stars Align into the 20th century. It is a socially relevant, historically accurate, saga of decades often overlooked in American history. A great read for all!

So listen now and share an interesting, and entertaining show as I chat with my special guest today on A Book and a Chat with Carole Eglash-Kosoff

You can find out more about my guest and their books at:
"Carole Eglash-Kosoff - Winds of Change"