A Book and a Chat with Braxton Cosby 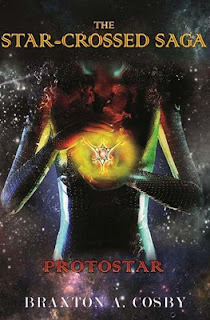 On today’s “A Book and a Chat” the book being discussed is “Proto Star” the first book in the “Star-Crossed Saga”: it is a magnificent start to an inventive series by my guest the talented debut author. Braxton Cosby (yes, Bill’s nephew aka Dr. Huxtable), With this debut book he definitely makes his mark in the science fiction, young adult and fantasy genres. In fact, Braxton has created a whole new genre ”Sci-fance”, a rich blend of science fiction and romance, a name that simply makes sense.

Braxton is a dreamer with a vision of continuously evolving and maximizing the untapped potential of the human genome. A physical therapist by background, Braxton received his Bachelors, Masters and Doctorate from the University of Miami, his fascination of science grew into an obsession of Sci-fi and on one unassuming Sunday this self-proclaimed romantic as we heard during the show, decided to pursue a 'calling' to create a new genre of writing.

Proto Star is the first of the Star-Crossed Saga trilogy, a mix of believable science fiction, no ray guns or weird creatures, set on earth it asks the question of what would win between “love and duty”. Written in sharp, strong prose, it is appealing, engaging and well-written and has received numerous five star reviews.

Star-Crossed Saga: ProtoStar begins by asking the question, love or duty? As human beings, we are all given free will. We are all faced with choices. We are all responsible for the consequences of our actions. Cosby poses these questions to the protagonist, Bounty Hunter Prince William Derry, and to his readers.

On the threshold of Civil War, the Torrian Alliance presses forward with its obligation of eliminating the universe of Star-children as a means to contain an intergalactic evil. King Gregorio Derry takes direction from his Council and sends his only son from Fabricius to Earth on an assignment to restore honor to his family. Bounty Hunter Prince William Derry has travels thousands of light-years, on a mission to fulfill an age old prophecy.

Sydney Elaine learns first hand, what the old adage, “Be careful what you wish for” means when she meets William Derry. Fate steps in, leaving Prince Derry to curtail his scheduled assignation of Sydney. It is during this delay that a bond is formed, leaving both awakened for the first time. Everything William believes is challenged.
Meanwhile, a diabolical act of treason is underway back home on Fabricius. It is this contemptible act of collusion and monarchical unraveling, that threatens to extinguish the lives of those William holds dear and destroy his dad’s noble birthright.

Will William be able to complete his task or will he sacrifice everything to follow his heart?

As we learned during the show the second book “Super Nova” is already in the editing stage, with the third book underway. I am sure the series would make a great film, something we discussed during the show, even to the fact have having a part for Uncle Bill.

You had me in the first chapter! I couldn't put it down. Very refreshing! Not like anything I have ever read before. I loved it! We want more!

Reviewer, your wish has been granted, and I’m sure we’ll hear a lot more from Braxton Cosby

So listen now and share an interesting, and entertaining show as I chat with my special guest today on A Book and a Chat with Braxton Cosby

You can find out more about my guest and their books at:
"Braxton Cosby - ProtoStar"