A Book and a Chat with Noah Baird 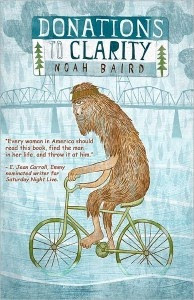 I haven't laughed this hard since 1967." Said Genny "Honu" LaFontaine, one of the reviewers of my guest Noah Baird and his debut book “Donations to Clarity”. We don’t know what made her laugh in 1967, but as anybody who listened to tonight’s “A Book and a Chat” vouch the author and his debut book are certainly things to exercise your chuckle bone.

No failed to get into clown school because of his grades but did get into the navy for fourteen years. Now I’m not sure if that just shows how hard it is to be a clown, or how many failed clowns there might be in the navy. After that as he shared with us during the show he went on to try and be a standup comedian, in Hawaii, working for food, in a dry club, often as we heard trying to tell jokes to a non English speaking audience. Still as we now know, he did have a boat named after one of his joke punch lines… (You’ll have to listen to the show to find out just what that was.)

About Donations to Clarity:

The plan was simple: hoax Bigfoot, then sell tours to Bigfoot enthusiasts. The plan wasn't brilliant, and neither were Harry, Earl, and Patch. The three chemical-abusing friends only wanted to avoid the 9 to 5 rat race, but their antics attract the attention of a real Bigfoot. When the misogynistic Earl is mistaken for a female Bigfoot by the nearsighted creature and captured; it is just the beginning of their problems.

The U.S. Government has a plan to naturalize the mythical creatures living within the U.S. borders. The problem is the plan needs to be carried out carefully. You can't just drop little green men and Sasquatch in the middle of Walmart without warning Ma and Pa Taxpayer. The naturalization program is not ready to be set into motion, and the rogue Bigfoot is bringing too much attention to itself, including a feisty investigative reporter who uncovers the truth of the government conspiracy and two Bigfoot researchers. No longer able to contain the situation, government agents are tasked with eliminating the Bigfoot and all witnesses.

Between bong hits and water balloon fights, Harry and Patch come up with a plan to save Earl and the lovestruck Bigfoot. Where do you hide a giant, mythical creature? In an insane asylum, because who is going to listen to them?

Along the way through this fun romp you’ll learn how Star Wars was a government training film for children, and the real truth behind Elvis meeting President Nixon,

As another reviewer put it

“… The implausible plot doesn't seem far-fetched for very long and the incredible characters are super-glued in my brain forever. If you want to take a rib-tickling ride, read this book! I think it will be the first of many amazing and zany novels to come from Noah Baird. I certainly hope so!"

I second that wish.

So listen now and share an interesting, and entertaining show as I chat with my special guest today on A Book and a Chat with Noah Baird

You can find out more about my guest and their books at:
"Noah Baird - Donations to Clarity"

Thank you for hosting Noah, Barry! Much appreciated!