A Book and a Chat with Daniel B Ferry 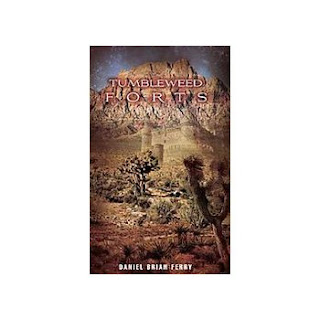 Daniel B Ferry is the guest on the last “A Book and a Chat" for 2011. His book “Tumbleweed Forts” I have seen reviewed as “A Fantasy as Amazing as the Desert Itself!” so I was looking forward to chatting with the author as well as finding out more about his book.

Daniel, grew up as an “air force brat” traveling to more countries in his pre teen years than most people do in a life time. For part of those younger years, as we learned during the show he lived near and played in the desert, himself building forts made out of tumbleweeds.

As he shared with us during the show, his book though written as a fantasy, covers many of the things that youngsters in the 50’s and 60’s might well have done, as well as a fantastic adventure story.

About “Tumbleweed Forts” (A review by Dellani Oakes)

Joshua is a lonely child. With only his imagination to keep him company, he invents epic adventures in his mind. He leads armies and builds magnificent tumbleweed forts in his desert home. When a trip to his fort goes awry due to a dust storm, Joshua's adventure really begins.

As he huddles in his fort, he is rescued by a mysterious girl named Zeleen. She takes him on an even more amazing adventure than those of his own making.

Many of the events depicted in the novel came from Ferry's own life. By his own admission, he is Joshua. Ferry is the son of an Air Force test pilot, as is Joshua. Though Joshua's description of his father's job is much more elegant and majestic. He calls him a "knight of the sky" - his plane is a "thundering airship".

Daniel Ferry's novel, "Tumbleweed Forts", is a fantasy as fascinating and magical as the desert itself. The reader is drawn into the world of Joshua's imagination, seeing the wonders through his eyes. We go with him as he journeys with Zaleen.”

It might have been written for middlegrade and YA, but is a book that can be read an enjoyed by people of all ages. The book explores the world through Time Travel and much, more, and with a seoncd book already underway, I’m sure we’ll hear more of Daniel B Ferry.

So listen now and share an interesting, and entertaining show as I chat with my special guest today on A Book and a Chat with Daniel B Ferry

You can find out more about my guest and their books at:
"Daniel B Ferry - Tumbleweed Forts"