A Book and a Chat with Amy Mittelman 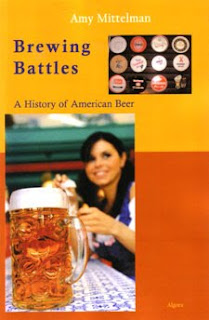 I met my guest today at "Write Angles 25" back in October last year. When I heard about her book and talked to the author, I know I had to have Amy Mittelman as a guest on my show.

Although today’s beer companies have their roots in pre-Prohibition business, historical developments since Repeal have affected industry at large, brewers, and the tastes and habits of beer-drinking consumers as well.

Brewing Battles explores the struggle of German immigrant brewers to establish themselves in America, within the context of federal taxation and a growing temperance movement, their losing battle against Prohibition, their rebirth and transformation into a corporate oligarchy, and the determination of home and micro brewers to reassert craft as the "raison d etre" of brewing.

Brewing Battles looks at beer s cultural meaning from the vantage point of the brewers and their goals for market domination. Beer consumption changed over time, beginning with an alcoholic high in the early 19th century and ending with a neo-temperance low in the early 21st. The public places where people drank also changed from colonial ordinaries in peoples homes to the saloon and back to home via the disposable six pack. The book explores this story as brewers fought to create and control these changing patterns of consumption.

Drinking alcohol has remained a favored activity in American society and while beer is ubiquitous, our country harbors a persistent ambivalence about drinking. An examination of how the industry prevailed in a sometimes unreceptive environment exemplifies how business helps shape public opinion.

Brewing Battles reveals the complicated changes in the economic clout of the industry. Prior to the institution of the income tax in 1913 the liquor industry contributed over 50% of the federal government s internal revenue; 19th century temperance advocates portrayed the liquor industry as King Alcohol. Today their tax contribution is only 1% yet brewing actually has a much more pervasive influence, touching on almost every aspect of modern American life and contributing greatly to the GNP.

Brewing Battles is book that takes you through American history for on so many levels not just those interested in beer, and is a book I’m sure many will find very interesting reading.

So sit back and listen to today's interesting and entertaining show as I host today's "A Book and a Chat with Amy Mittelman".

Direct link to the show
"A Book and a Chat with Amy Mittelman".

You can find out more about my guest and his books at:
"Amy Mittelman - Brewing Battles"