A Book and a Chat with Kristina McMorris 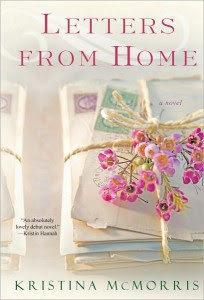 Some people are just creative, no matter what they do with their lives and my guest on today’s show is just one of those people. As on today’s show award winning actress, TV host and now author, Kristina McMorris drops by for a chat.

Kristina is creativity personified. She’s an actress, TV show host, entrepreneur, and public relations whiz, as well as an author. She hosted a children’s TV show for five years beginning at age nine, had a stint on Days of Our Lives and was in a comedy sketch with Jay Leno on The Tonight Show during college, and was the weekly host of the WB’s show Weddings Portland Style from 2001-2008. After earning a Marketing degree in three years at Pepperdine University, she founded her own company, Best Kept Secret, a full-service wedding and event planning business. She’s served as Director of Public Relations and Special Events for her family’s 18-company conglomerate, the Yoshida Group (perhaps most recognized for its line of Mr. Yoshida’s Gourmet Sauces) for over a decade.

Her trip into the world of being an author began in the fall of 2006 as a result of interviewing her grandmother for the biographical section of a self-published cookbook intended as a holiday gift for the family. During this time her Grandmother shared with Kristina her own war time romance and the large pile of letters between herself and her late husband.

From this acorn of an idea, the mighty oak that is now a numerous award winning novel “Letters from Home”.

About Letters from Home:

Inspired by a true account, LETTERS FROM HOME is a story of hope and connection, of sacrifices made in love and war – and the chance encounters that change us forever. n the midst of World War II, a Midwestern infantryman falls deeply in love through a yearlong letter exchange, unaware that the girl he’s writing to is not the one replying. Woven around this tenuous thread are three female friends whose journeys toward independence take unexpected turns as a result of romance, tragedy, and deception, their repercussions heightened by an era of the unknown.

Having spent a year in Florence during college, she dreams of living in Italy in a villa purchased with her millions of royalty dollars, but for now her family is content to dine at Olive Garden. However with a second book “Bridge over Scarlet Leaves” due out early next year, it looks like this creative lady has another successful string to her bow, this time as a bestselling author, perhaps that dream might happen.

So sit back and listen to today's interesting and entertaining show as I host today's "A Book and a Chat with Kistina McMorris".

"A Book and a Chat with Kistina McMorris".

You can find out more about my guest and their books at:
"Kistina McMorris - Letters from Home"