A Book and a Chat with Sebastian Stuart 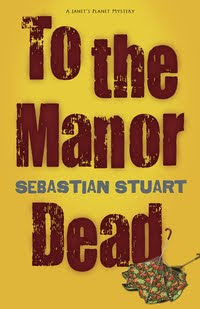 My guest on today’s “A Book and a Chat” is Sebastian Stuart who's been writing for well over twenty years.

His early days as a would be actor, included him being the only male in the off-Broadway hit Women Behind Bars (he hopes there are no photos of my nude scenes) and appearing on Broadway in the bomb Legend, starring that spitfire Elizabeth Ashley. His writing first showed itself in several plays which gradually developed into getting produced off-off Broadway at places like La Mama, Theater for the New City, and The Kitchen.

From there he went into screenplays and ghost writing for many years, until in 1999 he produced "The Mentor" which as New Woman put it… “A Deliciously Twisted Pyscho-Thriller.” which started of as a screen play and ended as a Book-of-the-Month Club selection.

This success was followed by several more, 24 Karat Kids (2006) – co-written with Dr. Judy Goldstein and then in 2008 Charm – ghost written as Kendall Hart within the soap “All My Children” not only that but they also launched a perfume called Charm at the same time, something not many authors can lay claim to.

In 2009 “The Hour in Between” was released to be followed by his latest book, the first in the Janet’s Planet series called “To the Manor Dead”.

About To the Manor Dead:

After a messy divorce and fifteen years of listening to sob stories, former New York City psychotherapist Janet Petrocelli is burnt out. Leaving behind life as a stressed shrink, Janet has opened a used-stuff shop in the quirky Hudson River Valley town of Sawyersville.
Unfortunately, Janet is a magnet for nut jobs. In this case, it's the Livingstons, an aristocratic family gone to seed in a disturbingly seedy way. Daphne, the clan's not-so-grande dame, offers her prized heirlooms to Janet for a hasty sale, but the deal ends abruptly when she turns up dead. Soon, Janet gets pulled into a tangled web of lust, insanity, avarice, and murder. Did a greedy developer kill off the biggest obstacle to his high-rise condo development? Or was it a family affair of the vengeful—and very twisted—variety?

Despite her resolve to steer clear of the murky depths of degeneracy and deceit, Janet becomes obsessed with finding justice for the dead . . . if the killer doesn't find her first.

During the show Sebastian shared with much about his writing, including this latest novel, as well as the second book in the Janet’s Planet series, and I’m sure Sebastian Stuart is a name we’re hear a lot more of.

So sit back and listen to today's interesting and entertaining show as I host today's "A Book and a Chat with Sebastian Stuart".

"A Book and a Chat with Sebastian Stuart".

You can find out more about my guest and their books at:
"Sebastian Stuart - To The Manor Dead"

Email ThisBlogThis!Share to TwitterShare to FacebookShare to Pinterest
Labels: A Book and a Chat, All My Children, CHarm, janet's Planet, Sebastian Stuart, soap, T The Manor Dead, The hour in between, The Mentor