A Book and a Chat with Jeff Sharrett 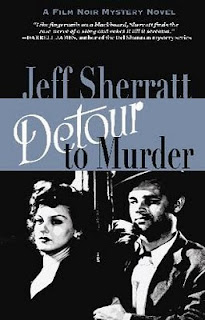 My guest on today’s A Book and a Chat is mystery writer Jeff Sharrett, sharing with us about his Jimmy O’Brien books, including his new book “Detour to Murder”.

As we heard during the show, Jeff has had enough experiences during his life to fill several books of his own story, from flying a plane for a gambling relative to writing biographies for would be politicians. And while there are no exact links to the characters in his so far four books, you can bet there’s a few of the perhaps more seedy characters that relate to some people he’s met in his life.

Jimmy O’Brien is a defense attorney to the dregs of the criminal world, the novels immerse the reader in the politics, society, and industry of Los Angeles in the 1970s, all the while maintaining a style more reminiscent of 1940s who-dunnit narratives than anything else. They’re classy, surprising, and endearing – in a murder mystery kind of way.

From his first two books “The Brimstone Murders” and “Guilty or Else”, Jeff has built up a following in the mystery world, his books clever, gripping, and addictive filled with multiple layers of suspense that keep the reader wanting more. His latest novel and many say his best so far “Detour to Murder”, is linked to the film noir icon, Detour.

About Detour to Murder:

Why did Al Roberts meekly confess to a brutal murder in 1945, then nearly three decades later swear that he’s innocent?

Jimmy O'Brien, defense attorney to the dregs of the criminal world, digs into the past, igniting a powder-keg that threatens to expose the long-held secrets behind Detour, the iconic Hollywood film documenting Roberts' story. Secrets that could destroy the underground aristocracy holding power in Los Angeles, city of broken dreams.

Each book while being part of the same series with several characters in each book, are equally readable as a standalone novel, with several more books in the pipeline already I’m sure we’ll hear a lot more of Jimmy O’Brien and Jeff Sharrett.

So sit back and listen to today's interesting and entertaining show as I host today's "A Book and a Chat with Jeff Sharrett".

Direct link to the show
"A Book and a Chat with Jeff Sharrett".

You can find out more about my guest and their books at:
"Jeff Sharrett - Detour to Murder"