A Book and a Chat with Mike L Kilday 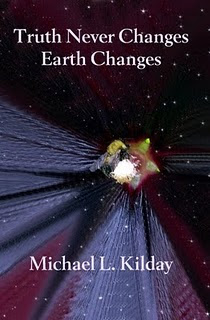 Back in 1979, my guest today, Mike L Kilday, went for a deep-trance, past life session with nationally-renown medium Elwood Babbitt, instead of learning about a past life, Mike found himself receiving a prediction of future Earth changes. Ten years and much study later Mike produced his book “Truth Never Changes: Earth Does”.

Weather changes, solar flares, past changes, predictions, are these signs or pointers to a doomsday scenario of the future?

Mike’s first book as he explained during an interesting show, was not just based upon the initial session with Elwood Babbitt, but upon what he read and discovered from such sources as the history chanel which lead to him putting together the pieces of the puzzle, that has not only lead to his current book, but also his second book which he shared during the show "Truth Never Changes: Genisis of the Path.

As one reviewer stated…

Isn't it good to challenge your natural inclinations? Healthy to step outside your mind's box once in awhile? To avoid the trap Paul Simon identified in The Boxer "...still a man hears what he wants to hear and disregards the rest."? Sure it is.

To assist in finding the Truth, human beings created prophecy. Is prophecy equal to Truth or is it an estimation of it? According to the sources of prophecy, the world as we know it will end on 12/21/2012. The faithful believe they will be ‘raptured’ into heaven beforehand and it is only the unfaithful who will suffer through the tribulation. Regardless of belief, will humanity be swept up into circumstances it neither understands nor controls? Will the events of 2012 happen anyway, or is that date just a mile marker on the road to the future

So sit back and listen to today's interesting and entertaining show as I host today's "A Book and a Chat with Mike L Kilday".

Direct link to the show
"A Book and a Chat with Mike L Kilday".

You can find out more about my guest and his books at:
"Mike L Kilday - Truth Never Changes"