A Book and a Chat with DCS 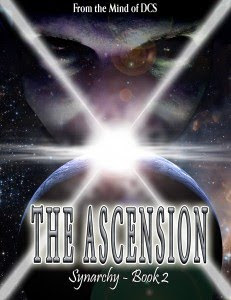 It’s always good to have return visitors on the show, learning about what they have been up to since they last appeared on the show as well as hopefully a new book or two. Today I am pleased to have such a return visitor, Sci-Fi Author, Spiritual Activist and Radio Show Host, DCS to chat about her latest novel “The Ascension” the second book in “The Synarchy Series”.

DCS spent time in the corporate world in records management, and briefly considered the possibility of making a living converting corporate paper into searchable tiffs. She then realized that the telling of well researched stories was her first, true love. Synarchy Book 1 - "The Awakening" is her first novel and was named a finalist in the 2008 Best Book Awards sponsored by USA Book News. Synarchy Book 2: The Ascension is her latest novel and is being adapted into a major motion picture. Six novels in the Synarchy Series are intended for release with Book 3: SVT and Book 4: The Black Widow due out in 2011.

About Synarchy: "I will die to see my will done. And it will be done."

A plan is exposed, centuries in the making and so sinister not even the legend himself could have predicted the depth of its impact on the world. In his lifetime Stefano Terenzio had a merciless ambition for absolute power. Two generations later the shock wave he ignited was still being felt. Now, as the world inches closer to 2012 sides are chosen, families divide and an epic battle begins that will determine whether mankind continues existing in a world of lies or shatters the chains that have held us prisoner since his-story was written.

Shocking yet hopeful, Synarchy slowly unravels the tightly laced reality we have created for ourselves. Blending the metaphysical with conspiracy, fact with fiction, debut author DCS has opened up a world that will force you to rethink everything you believe about your own. The knowledge within provokes the question: do you really want to know?

Sort of The Goodfather meets Star Gate, book one launched DCS on a path that as she shared with us during the program is now, with the growing appreciation of her writing along with book two is starting to see not only some reward but also a growing following that is already baying for books three and four to be produced.
We learned during the program how much as a writer DCS has learned from her first book enabling “The Ascension” to not only increase her success but also having it optioned for a movie.

So sit back and listen to today's thoroughly interesting and entertaining show as I host today's "A Book and a Chat with DCS".

Direct link to the show
"A Book and a Chat with DCS".

You can find out more about my guest and his books at:
DCS - The Synarchy Series

Email ThisBlogThis!Share to TwitterShare to FacebookShare to Pinterest
Labels: 2012, A Book and a Chat, Barry Eva, DCS, godfather, science fiction, Stargate, SVT, The Ascension, The Awakening, The Synarchy Series