A Book and a Chat with Patricia A. Thomas 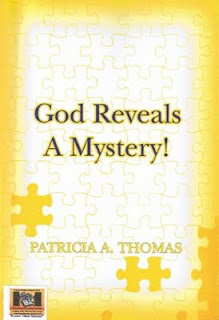 Over the July 4th holiday I was with my good friend M.J Allaire signing and selling books at the Groton (CT) "Sub Fest". MJ has written (so far) four books in her "Denicalis Dragon Chronicles". You may wonder what this has to do with my guest on today's "A Book and a Chat"

My guest today is Patricia A. Thomas who has written in her book " God Reveals a Mystery" her belief in the connection between dragons dinosaurs and snakes.

God first opened her spiritual eyes to the truth and spoke this revelation knowledge to Patricia, concerning the demise of the “dinosaur”, in 1997 and from that she wrote a poem, with the foundation being that the name “dinosaur” was coined or made-up in 1842 and the real animal's name is serpent or dragon (both names mean the same thing in Greek) and that they still exist- in its cursed form according to Genesis 3:14.

From that start it only took her a few months to write the manuscript and in 2006, God gave her the scientific information to write the book to prove that my theory would eventually become a fact, at the appointed time, unlike other theories that will never be proven. That year, in 2006, “God Reveals a Mystery” was published.

About “God Reveals a Mystery”

Lies and myths surround the dragon. With so many distorted pieces to a complex puzzle, only God can sort through the complexity of falsehoods and reveal the truth with simplicity. God knows everything and He can give you the solution to a puzzle that man could never fathom. Many know, especially in the continent of Asia, that the fictitious or mythical dinosaurs’ fossils really belong to the dragons'. Well, what happened to the dragons? There has to be an answer out there somewhere and there is. The God-given answer will surprise many. But, knowing the truth will set you free!

During the show Patricia shared much about how the book came about, the way is has been received and how she has developed the book also shortly adding visual imagery to help spread the word.

So why not sit back and share todays program "A Book and a Chat with Patricia A. Thomas"

Direct link to the show
"A Book and a Chat with Patricia A. Thomas"

or you can download the mp3 file of the show from
"Patricia A. Thomas"

You can find out more about my guest and their book at:
"Patricia A. Thomas - GOD REVEALS A MYSTERY"