A Book and a Chat with Lloyd Kaneko 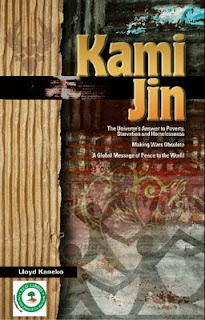 Lloyd Kaneko is my guest on today’s “A Book and a Chat”.

Back in the 1970’s Lloyd was driving through the “skid row” of downtown Los Angeles after school one afternoon and was deeply moved by all the homeless people living in cardboard boxes, pushing shopping carts and sleeping on the sidewalks. He was taking courses through the Writers Guild of America, West and decided to start a screenplay on the subject.

As Lloyd explained during the show, he has always written in some form, he is a former Staff Writer for Drum Corps News, and has written for various other magazines, newsletters, and blogs including Scenario.SC. and Allvoices. He also writes screenplays and is a member of the Alameda Writers Group. Lloyd has Bachelor of Arts in Creative Writing from California State University, Long Beach and has studied creative writing under Dora Beale Polk.

Although the book is based on fictional characters from a fictional Pacific island of “Napajan,” the phrase “Kami Jin” is Japanese and has multiple meanings. The word “kami” by one translation means “paper.” The word “jin” is translated into the English word “person or people.” Hence, “paper people.” Coincidentally, kami jin can also be translated into “godly person.” And, Gordon Sakata develops characteristics of a “godly person” through his “sermons on the mount” after being abducted into the Sierra-Nevada Mountain range and is forced to survive there for a few months.

One interesting item that came up during the show was the link his book has with Eco-Libris. Their “One tree planted for this book" logo is proudly displayed on Llods book cover. This states that for every printed copy of the book, Eco-Libris will plant at least one tree in the world. So far Eco-Libris balanced out over 145,000 books, which results in more than 158,000 new trees planted with its planting partners in developing countries.

So listen and learn about this fabulous author, on todays "A Book and a Chat with Lloyd Kaneko""

You can find out more about my guest and their book at:
"Lloyd Kaneko - Kami Jin"