A Book and a Chat with T. P. Jones 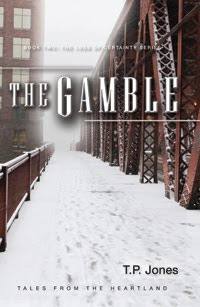 I am very pleased to have a previous guest back on today’s “A Book and a Chat”. T.P. Jones was previous on the show chatting about his life and his book “Jackson” which was the first book in the “Loss of Certainty Trilogy”.

Today Tom was back talking about the second book in the trilogy “The Gamble” .

Problems continue to accumulate in Jackson, Iowa. With the rising unemployment and stress on the budget, the city asks the public unions to take a 10 percent pay cut, an unprecedented proposal. The largest of the city unions responds by recruiting a new negotiator, Deuce Goetzinger, a man without negotiating experience but smart and tough, and Goetzinger counters the pay-cut proposal with one of his own, one so radical that it would change the power relationships in city hall should it ever be instituted. Thus begins a cat-and-mouse game between Goetzinger and Aggie Klauer, the city’s negotiator.

Despite the harsh winter conditions, the city is constructing a dog track on an island in the middle of the Mississippi River, taking advantage of a recently passed pari-mutuel law and rushing in order to have the first track built in the state. As Jackson’s old industrial base fades away, the city is staking its economic future on gambling and tourism. Given the high unemployment, Mayor El Plowman moves to make more of the track construction work available to local contractors, but like everything else she tries, this leads to consequences she would never have imagined, adding yet one more burden to the city in this, its year of troubles.

The dead of winter now, blizzards sweeping across the landscape in rapid succession, the conditions foretelling a massive spring flood mount up one after another.

As Tom shared with us during the show, this the second book is already out and doing well, with the third and final book “River Rising” due out in September. Along the way he also a brief preview of a novel he is currently working on set in Arizona.

So why not sit back and share todays program "A Book and a Chat with T.P.Jones"

Direct link to the show
"A Book and a Chat with T.P.Jones"

or you can download the mp3 file of the show from
"T.P.Jones"

You can find out more about my guest and their book at:
"T.P.Jones - The Gamble"

Email ThisBlogThis!Share to TwitterShare to FacebookShare to Pinterest
Labels: A Book and a Chat, Barry Eva, comedy novel, Dubuque, Jackson, race, racism, T.P.Jones, The Gamble, The Loss of Certainty