A Book and a Chat with Cindy Bradford 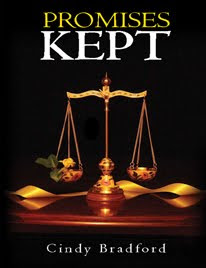 Though my guest today has been a writer most of her life, it was not until she retired that she wrote her first novel.

Cindy Bradford got the idea from a dream, which flowered into her debut novel “Keeping Faith” which has since been followed by the second book of the series “Promises Kept.”

With a hobby list that includes traveling,( which she does extensively), gardening, and cooking. Tasting, drinking, collecting, and reading about different kinds of wine and the countries that produce them. It is no wonder that it took until Cindy was retired for her first novel to be produced.

Romance readers will fall in love with Faith O’Brien’s gritty determination. After finding the father she never knew until adulthood, and graduating law school, she is focused on bringing down the priest who abused her father as a child. She wants the cunning, deceitful cleric put behind bars long enough that no other young boy will ever have to fear his touch. To do this, she takes on a veteran, highly experienced and shrewd Boston lawyer who will go to any means to win a case. But, he underestimates her passion for justice, her fight for right against a wrong.

Promises Kept is Faith’s story, an unforgettable young woman whose life’s journey has been filled with uncertainty, of searching for people and answers that others take for granted. Compassionate and courageous, she never gives up, showing strength and character beyond her years. It is also the story about the power of the human spirit, of family, friends and love.

While these books are both contemporary women’s fiction, but numerous men have read the first and told me they really liked it. If they have to go in another category, it would have to be romance, but there is so much more to both of them than just romance.

As Cindy shared through the enjoyable thirty minutes the third book is up to the editing stage with an idea for a fourth book already germinating.

From eating around the world to seeing both Oh Calcutta and Hair in New York, the program with this delightful lady was one all would enjoy. So why not sit back and listen to today’s show… “A Book and a Chat with Cindy Bradford”.

You can find out more about my guest and their book at:
"Cindy Bradford - Promises Kept"