A Book and a Chat with Teresa K. Thorne 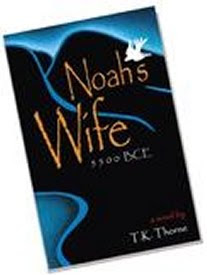 My guest today on "A Book and a Chat" has just produced her debut historical fiction novel, Noah’s Wife, though it is not the first the world has heard of this fascinating lady.

Growing up Teresa wanted to be an astronaut, until her father told her that was just not possible, stating that her eyesight was not good enough rather than the fact that at that time astronauts were male only. Instead she headed for a career in social working which led indirectly to her twenty two years in the police force.

However as we learned during the radio show, even as a rookie cop she still kept writing, with one of her yet unpublished works “Partners” coming from those early days.

Teresa tried her hand at historical fantasy, science fiction even a children’s mid-reader novel, on the way producing a screenplay, "Six Blocks Wide", which was shown at film festivals in Alabama and Europe.

Eventually she started on historical fiction novel, Noah's Wife (you just think you know why Noah built an ark!). During the show the whole historical aspect of how and why the characters directed Teresa to produce this book was shared.

About Noah’s Wife:
Noah’s Wife is Na’amah, a beautiful young girl with Asperger Syndrome who wishes only to be a shepherdess on her beloved hills in ancient Turkey, a desire shattered by the hatred of her powerful brother, the love of two men, and a looming disaster that threatens her world.

Na’amah tells her story and sees the world through the unique lens of a condition known today as Asperger's Syndrome. Her savant abilities and penchant to speak truth forces her down a dangerous path in an age of change--a time of challenge to the goddess' ancient ways, when cultures clash and the earth itself is unstable. When foreign raiders kidnap Na’amah, her journey to escape and return home becomes an attempt to save her people from the disaster only she knows is coming.

The Biblical account of Noah's wife only gives us a nameless woman who bears Noah's children and is with him in the ark. T.K. Thorne, an award winning author, has filled in the story with her imagination based on geological and archeological evidence of a great flood in the Black Sea region 7,000 years ago.

So sit back and listen to an enjoyable sixty minutes on today’s "A Book and a Chat with Teresa K. Thorne."

Direct link to the show
"A Book and a Chat with Teresa K. Thorne"

or you can download the mp3 file of the show from
"Teresa K. Thorne"

You can find out more about my guest and their book at:
"Teresa K. Thorne - Noah’s Wife"