A Book and a Chat with Robert "Doc" Gowdy 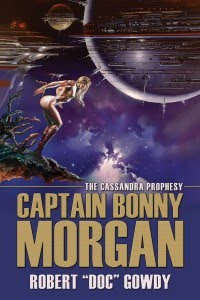 My guest on today's show Robert "Doc" Gowdy has been writing seriously, albeit academically, for a little over fifteen years. Now he has moved from the dryness of academic writing to a world of his own creation in his debut fiction novel, "Captain Bonny Morgan: The Cassandra Prophesy".

Captain Bonny Morgan: The Cassandra Prophesy is about the first steps in bringing down an evil galactic empire, the empire of Emperor Tulla the First. Captain Bonny Morgan, a beautiful galactic pirate, is contracted by an unknown “entity” to kidnap Princess Cosette, the Emperor’s step-daughter, in an effort to set events into motion. After Captain Morgan kidnaps Princess Cosette, her sister, Princess Lysette, sets out to find her kidnapped sister with the help of her beautiful but extremely mischievous slavegirl, Tink. The story is all about Tink and Princess Lysette’s adventure, and all the political intrigues, hidden agendas, unexpected revelations, and bold, daring gambits by everyone involved at every level of the conspiracy to overthrow the Emperor Tulla.

The book which is the first of a trilogy has enabled “Doc” to bring some of his favorite characters from literature and movies into a smart, entertaining, and often funny, adventure involving galactic pirates trying to overthrow an evil Imperial government. It is full of entertaining characters, a down to “earth” adventure novel set in the science fiction genre laced throughout with subtle and blatant humor.

During the show, “Doc” discussed how many of the characters came about from the playful, mischievous, and funny Tink (a full grown version of Tinker Bell), to Captain Bonny Morgan herself, (even the name is a mixture of Anne Bonny and Henry Morgan). The whole inspiration behind the story, the characters as well as how the various steps to production of his book were discussed by “Doc”.

The topic of how characters can lead you off on different tangents and the use of the internet and virtual book tours was discussed in what was a really entertaining and enjoyable thirty minute show, as I hosted “A Book and a Chat with Robert "Doc" Gowdy”.

You can find out more about my guest and their book at:
"Robert "Doc" Gowdy - Captain Bonny Morgan: The Cassandra Prophesy"