A Book and a Chat with "Shannon Delany" 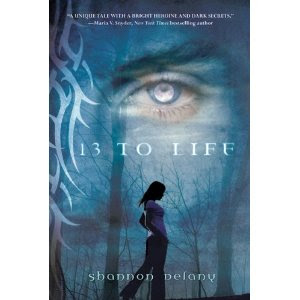 I have Shannon Delany as my guest on todays show, another of the wonderful group of authors who have their debut YA novel out this year. I am so pleased to have her as a guest to discuss her long awaited book "13 to Life".

There are some books that the expectasion bubbles up amongst the YA readers, until you almost feel the launch has already taken place.

There are some books that the expectation bubbles up amongst the YA readers, until you almost feel the launch has already taken place, “13 to Life” is one of those books. There has been so much written and commented about this debut novel that it is somewhat of a shock to realize that the actual launch date is not until June 22nd.

Shannon shared with us so much in the hugely entertaining sixty minutes of today’s “A Book and a Chat” it is a case of where to start.

After growing up writing various articles as a freelance journalist, Shannon wrote a serialized version of "13 to Life" at Textnovel.com and won the first-ever cell phone novel contest in the western world.

This opened the flood gates to her writing future, and agent then a film request and finally a publishing house followed one after the other taking Shannon somewhat by surprise, so that when she was asked to send in her completed manuscript of “13 to Life” as she explained during the show some “solid writing was required in a short time”

From those early days Shannon went on to describe during the show the various steps she has made along the way to the launch of the book. The fact the second novel is already with the publisher, who are stating they like it even better than “13 to Life” and the fact that the third novel is in the editing stage.

We discussed the advantages of being a member of a support group such as “The class of 2010”, to share knowledge, inspiration and understanding along the publishing highway. As well as many other aspects both of writing and the production of this already much acclaimed book. As well as the bad rap that wolves get compared to vampires.

"13 to Life is about love, loss, the meaning of friendship and what really defines a man versus a monster. It’s very much about self-discovery as Jessie tries to figure things out after losing someone she loves very much. And did I mention it’s about monsters? Yeah. Different people will take different things away from the story–some will pick up the quieter themes Shannon has tucked in there, some will just read it for fun. To me, that’s the way it should be."

You can find out more about my guest and their book at:
"Shannon Delany - 13 to Life"