A Book and a Chat with Judith Graves 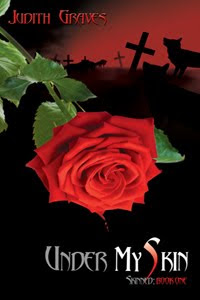 I was pleased to have another one of the 2k10 authors on my show today that is the group of writers whose maiden novel is coming out in two thousand and ten.

Today on "A Book and a Chat" my guest is Judith Graves talking to us about her life and her debut novel "Under My Skin". In addition to writing YA fiction, Judith is a singer, songwriter, and makes daytime appearances as a library technician, which helps with insatiable desire for reading enabling her to devour at least two books a week… in the reading sense that is.

As we learned during the show her fist book in the “Skinned” series, “Under My Skin”, was released in March by Leap Books, where she has also collaborated with author, Kitty Keswick, on the Origins series.

During a thoroughly interesting and entertaining sixty minutes of “A Book and a Chat” Judith shared with us how her writing experiences have wound through the poetry, song, short story paths to this first book of a trilogy. Through the show we not only learned about what lead to Judith writing “Under My Skin” but her steps along the road to publication have been helped by critic groups and now the 2K10 group of authors.

We even heard how Judith along with some of these other authors will be at the BEA in New York next month.

“Under My Skin” when asked to be described in three words, Judith stated “Power, Temptation, Choices”. As we heard during the show, it is a book that covers many aspects characters and indeed creatures, a novel that I’m sure will be a great hit leaving many waiting for the second and final book in the series.

The show was as normal full of interest and humor, covering such items such as Ann of Green Gables fighting zombie potatoes, how a joint critique and exercise group might help authors”, and what is it about seven minutes past nine?

So why not sit back and share a really interesting sixty minute show, or else download the mp3 file and listen to the show at your own convenience.

You can find out more about judith and her book at:
"Judith Graves - Under My Skin"