A Book and a Chat with Chuck Barrett 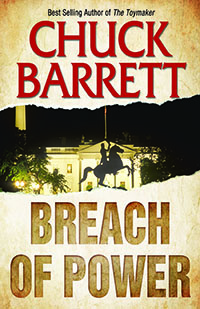 Chuck Barrett is my guest on today's "A Book and a Chat" an author I first came across during my show following "The Next Big Thing" blogs. During that show I came across his blog about his then  next book "Breach of Power" a book that comes out later this month and was fascinated about the subject and the success of his previous books.

Little did I know when I invited Chuck to be a guest on the show how it would flow with the previous show and the thriller writers such as Jon Land and Gary Grossman who have been gusts in the last few weeks.
Chuck comes from a background of air traffic control with a history of being a commercial pilot and flight instructor, where the only writing might be down to drafting labor agreements.

Like many though he knew he had a story inside of him, so using his own experiences and over a period of twelve years he produced his debut and now award winning novel "The Savannah Project " which also introduced the readers to Jake Pendleton.

The book became an award-winning novel, winning awards in ForeWord Reviews Book of the Year Award, International Book Awards, and Reader View's Reviewer's Choice Award and received such reviews as...
The Savannah Project signals the arrival of a new member to the thriller genre. "Chuck Barrett". The tale contains all of the danger, treachery, and action a reader could wish for. The intrigue comes from all directions, slicing and stitching with precision.

This success was followed by "The Toymaker" which as we learned from the show was inspired by a chance meeting while on holiday.

About "Breach of Power" (taken from Chucks web site)

A hiker finds a journal deep inside a glacier that was lost during World War II. On its frozen pages are etched the secret locations of treasures lost since the 1940s. But something more ominous is scribed in the journal, something that threatens the Presidency of the United States.

Jake Pendleton is summoned to the White House and instructed to locate and acquire the book. He soon realizes there are others on a quest to find it as well.

Others who will kill to get to it first...

As the reviewer of his first book noted...

...signals the arrival of a new member to the thriller genre. "Chuck Barrett".

This third book just cements Chuck as a writer that all thriller lovers will enjoy.

So listen now and share an interesting, and entertaining show as I chat with my special guest today on A Book and a Chat with Chuck Barrett

You can find out more about my guest and their books at:
"Chuck Barrett - Breach of Power"