A Book and a Chat with Marla Martenson 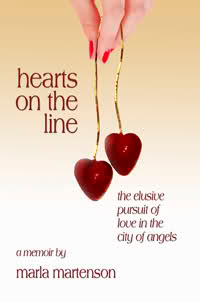 On today's "A Book and a Chat" it is a another welcome return to the show for a previous guest, this time in the form if matchmaker and I would add humorist Marla Martenson.  If you’re looking a read that will make you think as well provide a good laugh then her books are for you.

As we discovered on her previous visit from her early days when she wanted to be anything from a singer to a TV presenter, Marla had stardust in her eyes, which eventually lead her to Hollywood where her acting career included television commercials and print modeling, as well of course as the required stint waiting on tables.

Using this experience she has previously written  her previous books. Her first book “Excuse Me, Your Soul Mate Is Waiting” in which she combined her talent and wisdom with sure-fire techniques of the Law of Attraction to help you bring that special love into your life. This was closley followed by her second book “Good Date, Bad Date” a guide for single women who are tired of trying to figure out the secrets to successful dating. In her book “Diary of a Beverly Hills Matchmaker” Marla takes her readers for a hilarious romp through her days in an exclusive L.A. matchmaking agency and her daily struggles to keep her self-esteem from imploding in a town where looks are everything and money talks.

This last book has now been followed by "Hearts on the Line" in which Marla continues her won story of sinking to some very low times when, as she shares... "if the 99 Cent Store didn’t carry it, she didn't buy it."

From these profound reflections of her life and struggles Marla weaves in  enough  himour to have the reader laughing out loud.

About "Hearts on the Line" (Taken from Amazon)

Marla in her second installment, is still firing Cupid darts at work, a plush dating service she calls the “Double D”—which doesn’t stand for dream date. She and her husband Adolfo work hard to achieve their goal of leaving their small apartment behind and buying a home, but with a boss who requires Marla to cross ethical lines, a tiny spark is all it takes, and Marla goes from being vice-president of a multi-city enterprise to unemployment. Adolfo’s passion switches to anger and then resentment, Marla’s celebrity hob-knobbing, shopping in boutiques, and pricey Botox habit all skid to a dead stop.

Bills pile up. Determined, Marla turns to Craig’s list, connecting with a series of flaky employers, and if the 99 Cent Store doesn’t carry it, she doesn’t buy it. Broke and depressed, however, she rarely finds time to write. When a former client calls and asks if she’d work with him as a matchmaker privately, she shifts into a whole new level. Amazing things start happening. Not only does she help people find soul mates instead of trophies and sugar-daddies, she finds the emotional space to heal personal traumas in the past, ranging from the bullying she endured in her youth, a near rape, a disastrous previous marriage, and her father’s death—an unusual experience involving the ocean’s kiss. Marla writes as never before.

Adolfo is proud of her, but Marla still holds grudges as they search for a new home. She decides to rekindle the flame in her marriage and thinks she knows just the person to help: Chantal, a former client who owns a spa specializing in Brazilian hot waxes. This proves to be a hilarious blend of torture, comedy, and high hopes—a bit like life itself. Along with her clients, Marla’s heart is on the line as she discovers the powerful ways in which dreams are real.

So listen and enjoy about this fabulous author, on today's "A Book and a Chat with Marla Martenson""

You can find out more about my guest and their book at:
"Marla Martenson - Hearts on the Line"