A Book and a Chat with Halli Lilburn 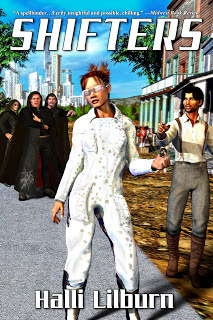 Like many other authors today’s guest Halli Lilburn has always dabbled in writing poetry and short stories, perhaps as she says it was her own therapy for those teenage years. She carried on this love for writing in her later life having many article and short stories published before finally creating her debut YA sci-fi adventure novel "Shifters".

The idea for the book came to Halli one night in a dream, never really thinking herself however to be a Sci-Fi writer it was a surprise to her when the idea for “Shifters” came to her.

The book is YA speculative fiction about a girl, Lina and her friends who stumble upon a government conspiracy taking place right in their school. The corrupt branch is called the Special Force and their purpose is to weed out students who they deem have corrupt DNA to create a superior race.

Students get expelled and go missing. Even more shocking, Lina finds out the Special Force is sending these teens to another reality. Lina steals the power to shift into new realities and uses this power to escape the Special Force and attempt to rescue her friends. It’s very plot driven, like a video game.

I found this YA novel engrossing and immensely invigorating. There's no wasted wordage, no dropped plot threads, just moment-to-moment excitement and adventure, with the romance, friendship, character integrity, and villainous "overlords" woven in intricately. Just as importantly, the story line is so very plausible: almost any contemporary society today is aware of how close it could come to a fascist "Big Brother" type society, without even realizing until too late.

The characters in this book are at first selectively chosen students of a new University, selected presumably for their higher capabilities. Yet they don't understand, amid all the rigid rules and strictures that their value is in their DNA. It is not until one of her former neighborhood playmates, a boy she has known for years, disappears from the University that Lina realizes something terrible is afoot, and she, Yussef, and Jan begin to explore what it is-and discover the concept of "Shifters"-those who can pass among alternate dimensions.

With the second book in the now trilogy already underway, I can see the main shifting Halli will do is towards the top of the Amazon selling list.

So listen now and share an interesting, and entertaining show as I chat with my special guest today on A Book and a Chat with Halli Lilburn

You can find out more about my guest and their books at:
"Halli Lilburn - Shifters"