A Book and a Chat with Justina Ireland 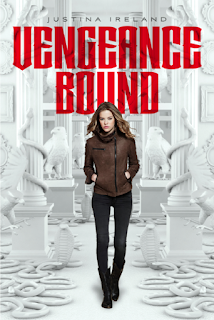 Yesterdays show was one of my one hour specials, as I welcomed another of the Class of 2K13 debut YA authors in the form of Justina Ireland.

Justina though doing the normal school writing did not really think about creating her first novel until recently. Far from following her love for historical events she created a YA novel more about dangerous girls than dangerous times. her debut book being called "Vengeance Bound".

Justina says about the book

“Vengeance Bound is really the product of two things: my time spent in the Army and being a light-skinned black girl and the expectations attached to both of those situations.”

Starting out she had her main character as a light-skinned black girl Justina found it a struggle to create the story, she then, as we learned during the show, changed her to the stereotypical dumb blonde and the story just flowed.

Cory Graff is not alone in her head. Bound to a deal of desperation made when she was a child, Cory’s mind houses the Furies—the hawk and the serpent—lingering always, waiting for her to satisfy their bloodlust. After escaping the asylum where she was trapped for years, Cory knows how to keep the Furies quiet. By day, she lives a normal life, but by night, she tracks down targets the Furies send her way. And she brings down Justice upon them.

Cory’s perfected her system of survival, but when she meets a mysterious boy named Niko at her new school, she can’t figure out how she feels about him. For the first time, the Furies are quiet in her head around a guy. But does this mean that Cory’s finally found someone who she can trust, or are there greater factors at work? As Cory’s mind becomes a battlefield, with the Furies fighting for control, Cory will have to put everything on the line to hold on to what she’s worked so hard to build.

The book is due to be launched in April and Justina already has a second book possibly being called “Promise of Shadows” scheduled for March next year.

So listen now and share an interesting, and entertaining show as I chat with my special guest today on A Book and a Chat with Justina Ireland

You can find out more about my guest and their books at:
"Justina Ireland - Vengeance Bound"