A Book and a Chat with Mara Jacobs


Sometimes when you do a show you get a premonition about how it’s going to be, today’s was one such event. Before the show started I warned my guest about possible issues with the hosting and that if I disappeared to carry on chatting by herself. I do not know why I mentioned this it’s not something I normally do. But it was a good thing I did, about six minutes before the end of what was turning out to be a great show, I lost all power and could not get back into the show until a minute before the end, my guest though like a true trooper carried on sharing information about herself and her books… thank goodness.

My guest is Mara Jacobs whom I came across while doing my “next big thing” blog crawl a few weeks back.

Mara came late to the writing life, not being one of those who had wanted to be a writer since they could first hold a crayon. However since she has made that choice the books have simply rolled from her fingertips.
Be it thriller novel or an historical novel there is romance never far away from the creative writings Mara produces. Already with different series of novels, the following this author can be seen by the huge number of reviews on Amazon.

The series that Mara has written include the “Anna Dawson Vegas” series.

A compelling story of obsession and intrigue. Blackbird is forced to live in seclusion but the reader gets the impression she likes it there just fine--until she has to leave the nest. Her isolation is tangible. The twists and turns in this book were quite surprising.

Both series as we learned during the show having interesting backgrounds stories. 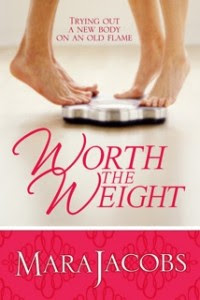 Perhaps though Mara’s most popular series is her “Worth” series a contemporary romance series featuring three life-long girlfriends who are now in their mid-thirties. Subtitles are The Nice One, The Pretty One, and The Smart One. Each woman was pegged with their title in school and in some ways it has shaped the women they’ve become —and yet they’re so much more.

Currently a trilogy, though there will soon be a fourth novel, the series consists of “Worth the Weight”, “Worth the Drive” and “Worth The Fall”.

As one of the many reviews for “Worth the Weight” states..

“Just finished reading this great romance book! Ms Jacobs does an awesome job of telling a great story and addressing some of the issues vulnerable women - and men - face in today's world. Her ability to touch on the emotional sides of relationship issues while still keeping the humor in the telling makes for an easy to read "can't put down" book. I can't wait to read the other two books in the series!

Well the series is now out in a three book box set so readers can follow each of the woman’s stories.
With several more books in each of Mara’s series already underway the name of Mara Jacobs will be on all romance lovers must have lists.

So listen now and share an interesting, and entertaining show as I chat with my special guest today on A Book and a Chat with Mara Jacobs

You can find out more about my guest and their books at:
"Mara Jacobs - Worth Series"

Email ThisBlogThis!Share to TwitterShare to FacebookShare to Pinterest
Labels: A Book and a Chat, Anna Dawson, Blackbird, Mara Jacobs, Must read, Romance, Worth the Drive, Worth the Fall, Worth the Weight