A Book and a Chat with Jon Land 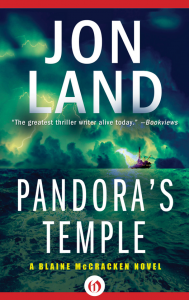 Jon Land is the author of over thirty critically acclaimed novels including the Caitlin Strong and the Blaine McCracken series. Today he is my guest on "A Book and a Chat" in a show that was a pleasure to host.

An extensive traveler as well as having a twenty five year career in martial arts, Jon started writing while at Brown University where he persuaded the faculty to accept a techno thriller as his honors thesis. From that start he has steadily produced hit novel after hit novel.

Female Texas Ranger Caitlin Strong has so far appeared in three books in the "Strong" series, "Strong Enough to Die", "Strong Justice", and "Strong at the Break". During the show we also learned that there are further Catlin books in the pipe line.

Blaine McCracken a rogue CIA agent and former Green Beret with the skills of James Bond but none of the Englishman's tact, is a central character who is featured in a series of techno-thriller novels.

Debuted in 1986 in the novel "The Omega Command" Blaine appeared in 9 books before Jon gave his character a rest after "Dead Simple".

Now 14 years later Blaine McCracken is back with us and more popular than ever in Jon Land's new book "Pandora’s Temple".

About "Pandora's Temple": (taken from Partners in Crime)

What if Pandora's box was real. That's the question facing Former Special Forces commando and rogue agent Blaine McCracken who returns from a 15-year absence from the page in his tenth adventure.

McCracken has never been shy about answering the call, and this time it comes in the aftermath of deepwater oilrig disaster that claims the life of a one-time member of his commando unit. The remnants of the rig and its missing crew lead him to the inescapable conclusion that one of the most mysterious and deadly forces in the Universe are to blame—dark matter, both a limitless source of potential energy and a weapon with unimaginable destructive capabilities.

Joining forces again with his trusty sidekick Johnny Wareagle, McCracken races to stop both an all-powerful energy magnate and the leader of a Japanese dooms-day cult from finding the dark matter they seek for entirely different, yet equally dangerous, reasons. Ultimately, that race will take him not only across the world, but also across time and history to the birth of an ancient legend that may not have been a legend at all. The truth lies 4,000 years in the past and the construction of the greatest structure known to man at the time:

Pandora’s Temple, built to safeguard the most powerful weapon man would ever know.
Now, with that very weapon having resurfaced, McCracken’s only hope to save the world is to find the temple, the very existence of which is shrouded in mystery and long lost to myth. Along the way, he and Johnny Wareagle find themselves up against Mexican drug gangs, killer robots, an army of professional assassins, and a legendary sea monster before reaching a mountaintop fortress where the final battle to preserve mankind will be fought.

The hero of nine previous bestselling thrillers, McCracken is used to the odds being stacked against him, but this time the stakes have never been higher.

As well as the follow up for "Caitlin Strong " we learned that further "Blaine McCracken"  books are on their way from this prolific and bestselling author.

So listen now and share an interesting, and entertaining show as I chat with my special guest today on A Book and a Chat with Jon Land

You can find out more about my guest and their books at:
"Jon Land - Pandora's Temple"