A Book and a Chat with Nicole McInnes 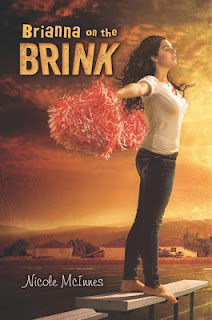 Today’s show  was another of those wonderful one hour specials well I meet and chat with one of the wonderful YA debut authors from the Class of 2K13, Nicole McInnes.

Nicole has always been immersed in literature from growing up spending her time hid away in her elementary school library that ended in her winning a bar of Cadbury’s Fruit and Nut chocolate to getting her Bachelor’s Degree in Literature and a Master’s Degree in English.
Along the way Nicole tried her hand at several different styles and formats until finally after a little prodding she turned her talents to writing YA (young adult) literature, the result of which is her debut book “Brianna on the Brink”.

Listening to Nicole during the show, it is a little surprising that she did not produce a book on horses or even soap making. Both of which have played a part in Nicole’s life

She has already received such comments as…

I started reading Brianna a couple of days ago and I can't stop. The author brings the emotions and angst of the American teenager clearly to the reader.

A Nicole shared, she has even received messages from people who have read the book and found their eyes tearing up, and such is the emotion that Nicole has been able to produce within her book.

About “Brianna on the Brink”: (taken from lucky13 group web site)

Sixteen-year-old Brianna Taylor finds herself lost, alone and pregnant after a one-night-stand (let's just say it's complicated). Just when she's got nowhere left to turn, help arrives from the one person who is closest to her big mistake, but accepting that help will leave Brianna forced to choose between clinging to the ledge of fear and abandonment - or jumping into the unknown where a second chance at hope might just be waiting.

Though her book is not officially being launched until March she has already ruffled the YA bloggers pond.

So listen now and share an interesting, and entertaining show as I chat with my special guest today on "A Book and a Chat with Nicole McInnes"

You can find out more about my guest and their books at:
""Nicole McInnes - Brianna On The Brink"