A Book and a Chat with Brandt Dobson 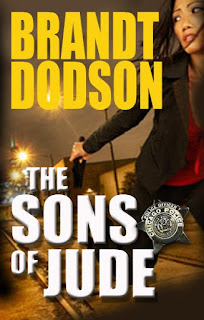 Brandt Dobson, today’s guest on “A Book and a Chat” discovered at grade school that he wanted to write, however it was not for some twenty years later that he finally put pen to paper.

Sidetracked by work with the FBI, Navy and Podiatric Medicine it took a while for Brandt to follow his true calling, including a wait of twelve years before he finally  got the dreamed of book contract.

His first book “Original Sin” soon had his name and that if his hero “Colton Parker” on the must read for detective/thriller readers. This first book in the Colton Parker Mystery Series” was soon followed by “Seventy Times Seven”, “The Root of All Evil” and “The Lost Sheep”.

The series has become a popular must read with readers clambering for more of Colton Parker, now though Brandt has put before his readers a new series that looks like being even more popular than Colton Parker.

“The Sons Of Dude” is the first in ”The Sons of Dude Series and introduces us to not one but three characters that readers will be able to follow in future novels in the series.

About “The Sons of Dude”: (taken from Seatlepi blog)

The Sons of Jude is about the challenges cops face and how they often come from within their own ranks. The novel revolves around three central characters: Frank Campello, a twenty-year veteran of the Chicago police department; Andy Polanski, a newly-minted detective who is transferred to Campello's district after ratting on other cops; and Christy Lee, a local reporter with a grudge against the police.


With a mix like that, conflict is inevitable. It was a lot of fun to write.

Judging by the reviews so far it was not just fun to write but is proving to be great fun to read. Comments like “..a very well written suspense, thriller that provided a few twists and a satisfying end.," litter his many reviews.

So listen now and share an interesting, and entertaining show as I chat with my special guest today on "A Book and a Chat with Brandt Dobson"

You can find out more about my guest and their books at:
"Lynne Kelly - Chained"

Email ThisBlogThis!Share to TwitterShare to FacebookShare to Pinterest
Labels: A Book and a Chat, Brandt Dobson, Colton Parker, Detective, Original Sin, Seventy Times Seven, The Root of All Evil, The Sons of Jude, thriller