A Book and a Chat with Ray East and Sam D 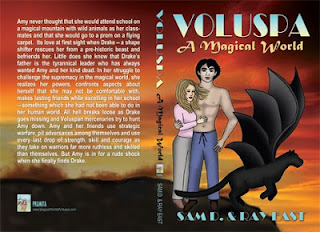 I am back from my trip back across the pond to England, and what a wonderful time I had there, the whole country during the Olympic Games seemed to be walking around with a smile on its face. From the first to the last it was a truly magical event.

You can read my Olympic blogs at http://acrossthepond-storyheart.blogspot.com

Talking about magical it’s great to have on my first show back a writer of another truly magical time and location.

Ray East along with her partner Sam D is the author of the magical, mythical, adventure, romance, coming of age YA fantasy novel VOLUSPA- A Magical World.

While the book is a YA fantasy. It is a crossover between urban fantasy and paranormal romance with a mythological and dystopian twist. This book showcases a unique coming of age story of a fifteen year old girl who struggles with the ramifications of forbidden love, obscure parentage and in essence struggles to find her place in a world that is threatened by her very existence.

One reviewer described the book as having “the edge of Harry Potter, the vibe of Narnia and the twists of Twilight”… now that puts this book as a must read, which it is.

About VOLUSPA- A Magical World(Taken from Amazon)

Twilight meets Harry Potter Amy, a forlorn fifteen year old girl from NYC, never thought that she would attend school on a magical mountain with wild animals as her classmates and that she would go to a prom on a flying carpet.

Its love at first sight when Drake- a shape shifter rescues her from a pre-historic beast and befriends her. Little does she know that Drake’s father is the tyrannical leader who has always wanted Amy and her kind dead. In her struggle to challenge the supremacy in the magical world, she realizes her powers, confronts aspects about herself that she may not be comfortable with, makes lasting friends while excelling in her school - something which she had not been able to do in her human world.

All hell breaks loose, as Drake goes missing and Voluspan mercenaries try to hunt Amy down. Amy and her friends use strategic warfare, pit adversaries among themselves and use every last drop of strength, skill and courage as they take on warriors far more ruthless and skilled than themselves. But Amy is in for a rude shock when she finally finds Drake.

The book has already received many rave reviews with readers clamoring for the next in the series, it is indeed a book for the whole family. As one reviewer wrote..

A plot which sucks you in and you wish for more. The 5 main characters of Amy, Drake, Jacek, Amelio and Cornelius are very well fleshed out, and this is something you dont get to see a lot in middle grade books. I love Amy, the 15 year old heroine and i felt i could relate to her a lot.

What makes books for me is the writing, and this story is amazingly written. There are ancient creatures, gnomes, kapas, griots, niads,gangrels, magic, and you think to yourself "This is true fantasy as far as fantasy will go" but because of the writing, you also feel for the characters, and it all seems so real, so normal, and so true. The events in the book are grand and fantastical, but the emotion that the characters feel, and that you feel with them, is very grounded and personal.

The writing and the story caters itself well to the teen reader, but I enjoyed every bit of reading it with my 12 year old.

So listen now and share an interesting, and entertaining show as I chat with my special guest today on A Book and a Chat with Ray East and Sam D

You can find out more about my guest and their books at:
"Ray East and Sam D - Voluspa: A Magical World"