A Book and a Chat with Daniel Haight 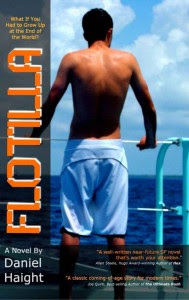 Daniel Haight is today’s guest on “A Book and a Chat” raised on Star Wars and Star Trek he has always been a fan of science-fiction. He wrote his first story when in Sixth Grade, an epic tome featuring the adventures of a guy named ‘Daytona Titanium’. From this early experience Daniel went on to write short stories which received rave reviews by fans and professionals alike from all over the world.

This success and contact from fans lead him to make the step and create “the big one” his debut novel “Flotilla”.

Flotilla is the gripping post-apocalyptic science fiction novel that has been described as “Mad Max meets Master & Commander.” Jim Westlake is a teen in the near future just out of rehab raising fish with his father on an ocean colony off of the coast of Los Angeles. Jim wants to put his past behind him but the fact that they live with several thousand strange and dangerous people, doesn’t help.

All of this changes when disaster strikes. Multiple terrorist attacks force Jim’s father to abandon him and head to the mainland. Now Jim has to save his sister from angry drug dealers and pirates. How will Jim rise above his past to survive his future? The answer will keep readers hooked until the very last page.

This first book of what now promises to be a series has already received some great reviews and is being enjoyed by all ages. As one reviewer wrote…

Every once in a while, a book will come along and remind you what storytelling is all about. Flotilla is one of those books. A fast-paced tale with plenty of laughs and thrills while a troubled teen survives two very crazy summers on an experimental ocean-based colony.

There's two things I love about Flotilla: Interesting ideas and lovable characters. You won't have any trouble identifying with Jim, the recently-sober teenager who has to overcome some poor choices and grow up fast among some dangerous and hysterical adventures. The lifestyle on the Colony in Flotilla has a lot to recommend it - living aboard a yacht while raising fish for sale in a community that's long on freedom and short on safety.

Despite his poor start, Jim has to take a big step forward to adulthood when his estranged father is drafted and sent to shore due to a national emergency. Some angry drug pirates, the DEA and some half-crazed colonists line up to exact revenge - now what is he supposed to do? I found Jim's fear and love to be a great metaphor for some scary life choices that I had to make when I was his age.

A second book is already planned along with a book of Daniels short stories and I can see the name of Daniel Haight being on many people’s must read books.

So listen now and share an interesting, and entertaining show as I chat with my special guest today on A Book and a Chat with Daniel Haight

You can find out more about my guest at:
"Daniel Haight - Flotilla"

Email ThisBlogThis!Share to TwitterShare to FacebookShare to Pinterest
Labels: A Book and a Chat, action adventure, book for all, Coming of Age, Daniel Haight, Flotilla, post apocalystic, science fiction