A Book and a Chat with Jonathan Maxwell 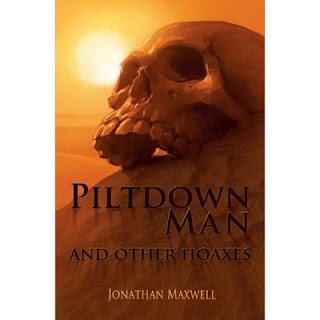 Back in April of 2010 Jonathan Maxwell was the guest on “A Book and a Chat” talking about his award winning book "Murderous Intellectuals: German Elites and the Nazi SS".

As I said at the time…

“Sometimes you come across a book about something that is well known, yet my guest author still finds a new way to look at the subject.

In Murderous Intellectuals: German Elites and the Nazi SS, Jonathan Maxwell sets himself two daunting and urgent tasks—to explain why the Holocaust occurred and to prevent future genocides. In doing so, he takes the reader from the minutest of details about individual Nazis to grandiose narratives about human nature, psychology and civilization.”

Today Jonathan is back with some totally different, though again full of stories and issues we all know yet showing us the readers a different side to subject.
In his new book “Piltdown Man and Other Hoaxes” Jonathan explores scientific frauds through history from Bigfoot to Atlantis, Sea monsters to Mermaids, he focuses especially on the Piltdown Man Hoax, which is sometimes casually called the Missing Link Hoax.

In the early 1900s, a group of men unearthed a human cranium and jaw from an excavation in Piltdown, England. Soon, many scientists hailed the discovery as being Charles Darwin’s “Missing Link.” Decades later, the discovery was revealed to be an elaborate hoax. The cranium came from a thoroughly modern human being, while the jaw came simply from an ordinary ape. In the process, the fraud cast a dark shadow on the emerging scientific field of anthropology and the study of human origins.

Jonathan is already at work on his next book, once again a totally different and perhaps known about subject taken from his now normal investigative different angle. I am looking forward to this next book “Tragedy at Altamont” Where he investigates the Rolling Stones, the Hell's Angels, Death, and Sympathy for the Devil, a work which chronicles the Rolling Stones‘ disastrous 1969 tour

So listen now and share an interesting, and entertaining show as I chat with my special guest today on A Book and a Chat with Jonathan Maxwell

You can find out more about my guest at:
"Jonathan Maxwell - Piltdown Man and Other Hoaxes"