A Book and a Chat with Robert JR Graham 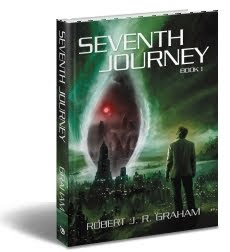 Robert JR Graham has over the last 20 years focused on self-development and personal mastery, dedicating his life to uncovering the deeper truths within us all. This has included research into various topics such as quantum physics, eastern mysticism, psychology, philosophy, martial arts, and many other subjects leaving no stone unturned.

Taking this experience and interweaving it with his own personal adventure of self-discovery, vivid dreams, and unique life experiences Robert has produced the first book in what promises to be a fast paced fiction series called “The Seventh Journey”.

About “The Seventh Journey” : (taken from Robert’s web site)

Toronto, ON – Seventh Journey is a thrill-seeking adventure that will leave you questioning what you really know and believe about the reality we find ourselves consumed with. In the series’ first self-titled book, Graham weaves a fantasy story line that illustrates the power of self-realization.

In Seventh Journey readers meet Jacob Cross, a staff scientist at Netex, an advanced research firm with more than one secret agenda. Using a sound wave technology called Auditum, the nefarious research firm develops a mind-altering headset with the power to control minds and even hurl users into a different dimension.

Cross had been deeply involved in developing the headset and was lead to believe the technology would serve various medical applications. Now terrified that his invention will be used to enslave millions, Jacob sends himself through the dimensional portal. But will he be able to stop the firm’s devious plan?

Recipient of the coveted Editor’s Choice and Rising Star Awards on behalf of Publisher iUniverse.”

The response so far to this first book in the series has been really good, comments such as “I got hooked in the story and now I can't wait for the next book” and “found while I was reading, the narrative came to life in my head which kept making me turn the pages” are sprinkled amongst the reviews.

Seventh Journey is an incredible story of Jacob Cross, a researcher who wakes up with limited memory. Originally Cross is working on a cure for insomnia, or so he thought, but those employing his research have other plans for his work. They want Cross to develop a form of mind control that would give them a tool they believe will allow them to control the masses. This book introduces alternate universes or realms where Jacob meets Tamara but when he returns to his own realm he cannot remember clearly if his trip to the alternate universe was a dream or reality. And to add to the chaos of his limited memory he is also a suspect in a murder. This was a fantastic creative addition to the sci-fi genre and I am beyond excited to follow Cross' adventures further.

Well with the second book already almost completed and due out next year, readers will soon get their wish.

So listen now and share an interesting, and entertaining show as I chat with my special guest today on A Book and a Chat with Robert JR Graham

You can find out more about my guest and their books at:
"Robert JR Graham - The Seventh Journy"