A Book and a Chat with Gary Grossman 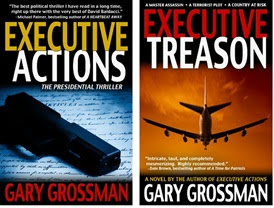 Can you remember the early Saturday morning TV shows? Did you listen to the news from far off places on an old valve radio? The guest on today’s “A Book and a Chat” did both of those one he has written about and the other lead him down the path that would produce numerous awards including the prestigious Governor's Emmy Award for their USA Network special, "Healing the Hate" and an Emmy for Best Informational series for “Wolfgang Puck” for Food Network.

But for Gary Grossman it goes back to those early days listening to that short wave radio and watching the Saturday TV shows. He started at the age of 15 as a disc jockey at WHUC, his local radio station in Hudson, New York before going spreading his wings in television. Now along with Robb Weller he forms “Weller/Grossman Productions” , a prolific documentary and service and information television production company that have produced more than 6,000 programs.

His early days have not been forgotten and he has produced two nonfiction books “Superman Serial to Cereal” and “Saturday Morning TV”. Now this talented creator has gone into the fiction world creating the first two books of a Trilogy which some call “Political Thriller” but he prefers “Political Reality”

About “Executive Actions” and “Executive Treason” (Taken from Writers and Authors)

EXECUTIVE ACTIONS” and “EXECUTIVE TREASON” have just come out as a pair of eBooks.

The books deal with Russian sleeper cell spies still working in the U.S. and a 30-year plot designed to infiltrate the highest levels of U.S. government and bring down the presidency.

The underlying background is real…very real right down to the institution that the Russian spies attended and a coup attempt that parallels an actual plan to unseat Franklin Roosevelt in 1933.

There’s a master assassin and a terrorist who has a personal back-story that drives his machinations.

Gary’s novels are set in today’s world, playing off the news, the media and characters that will seem very familiar to readers.

These first two books will be followed later this year by “EXECUTIVE COMMAND.”

If you like thrill a minute novels full of twists and turns full of suspense and powerfully written then the books of my guest today Gary Grossman are for you.

So listen now and share an interesting, and entertaining show as I chat with my special guest today on A Book and a Chat with Gary Grossman

You can find out more about my guest and their books at:
"Gary Grossman - Executive Treason"