A Book and a Chat with Angela Hart 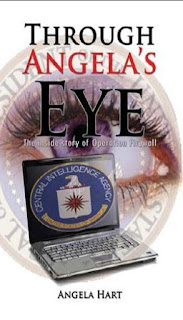 How safe is your computer?
Do you think the firewall and security functions keep you save and all your data?

There might be laws in place now and a lot more information to help make your online and offline life more secure, but we are still always hearing about identity and internet theft.

This is in 2012 but what about seven or eight years ago, before there were laws, before there the cyber policing that there is now?

My guest on today’s “A Book and a Chat” is Angela Hart, in her book “Through Angela’s Eye” she tells the story of what happened to her and what she did to fight back. A fight that led to over 4,000 cases and over 64,000 arrests!

About “Through Angela’s Eyes” (In Angela’s own words)

Identity theft is the number one crime in the United States right now. Read this intriguing story on how I tracked down those who had stolen my identity as well as the identities of millions of others. There are many things people can do to protect identity theft from occurring whether online or just in daily activities. Read how this landmark case, Operation Firewall changed the financial industry and computer technology as we know it today.

Through Angela's Eye is the true, inside story of Operation Firewall. After a series of unfortunate changes in circumstances, my life took an unwelcomed turn. What started out as my personal battle against those terrorizing me by stealing my identity through my personal computer turned into the largest case of identity theft in United States history! Although the computer hackers caused me financial distress, once they threatened my life, I became angry and determined to get justice. Little did I realize that my journey would lead to the exposing of corruption within our own government up to the vice president and president of the United States and continued right up to the United Nations! Once the first domino fell, a series of events began to unfold.

Operation Firewall began in July 2003 as an investigation into access device fraud before expanding into an investigation of global credit card fraud and identity theft fraud. This case led to the inception of many laws being placed on the books to prosecute those who were perpetuating the crimes. The removal of spyware, malware, and malicious web sites that were trafficking in stolen identities, spam, hacking and even pornography are some of the positive results.

My account of “Operation Firewall” will make Watergate look like child’s play. It has led to over 4,000 cases and well over 64,000 arrests as of December 2005. The ramifications of this case will go on for years to come. As a result of the investigation, over $260 billion per year is being saved by taking these criminals off the streets. It was a war that was fought without weapons but used computers coupled with a woman’s intuition and common sense!

The first chapter of the book deals with my experience with purchasing a web builder and setting up an e-commerce web site. The online blog documents the ordeal in detail. When I discovered that they had stolen my identity, I listed all of the steps someone needs to do to stop the identity theft. Stealing my identity was not enough for them, but they were also stealing the identities of those who were making purchases through the website. Not only was the website designed so that they had a view of all the credit information someone inputs online to place an order, my computer had been compromised.

Next I go into how I figured out my computer had been hacked and who was behind it. By exposing why, who, and how they accomplished this, it helps the reader to discern what signs to look for. Thinking I was protected by a firewall and antivirus program was a false sense of security since my original computer guy had installed the original Trojan and key logger.

Two chats with the hackers are in the book. I put them in for a few reasons. First, I wanted to keep the interest of young people. In the first chat I was able to get one of the hackers to expose and admit to what he had done a few years earlier. In the second chat, I did to the hacker what he did to me except I did not threaten his life. The lesson was you don't know for sure who you are talking to online, nor do you know what they are involved in.

The one who hacked my computer was the same one who hacked T-Mobile and stole Paris Hilton's address book, the Bank of America thefts, the MasterCard/Visa 20 million addresses, Citibank, etc. Over 4000 cases started as a result. The book is still tying into current events.

The story takes a turn when my computer guy and I are the only 2 people who know about the File. Without us in the picture, they would be able to backdate it to try to use it as the excuse of why the US went to war. I expose those within the government who were involved in the attempted cover up as well as exposing the news stories that were altered to try to scare us into backing off the case and accepting their so-called offer of the witness protection program when in reality it would be only to protect their secrets and we were going to be removed from our lives. Instead, they were all arrested and sitting behind bars.

All 48 of the original hackers involved in Operation Firewall have all been arrested and convicted. This case let to over 4,000 cases and 64,000 arrests as of December 2005. All of the threats and apologies were done in writing. I use documentation throughout the book and link it together with the story, all in chronological order. It exposed a world-wide internet mob ring that was bent on targeting people with e-commerce websites as well as secretly spying on people in the privacy of their own homes through their webcams.

The letter to my cable company was also included since they were involved. The threats from the government as well as the apologies were also published since I had these in writing. Some of the names and locations were changed.

Angela’s goal is to help educate people about identity theft/cyber bullying by showing them how and why they did this and how to get them to expose themselves. The book I believe is a must for all and is an eye opener for everybody who uses the internet. I highly recommend this book

So listen now and share an interesting, and entertaining show as I chat with my special guest today on A Book and a Chat with Angela Hart

You can find out more about my guest and their books at:
"Angela Hart - Through Angela's Eye"