A Book and a Chat with Lilian Duval 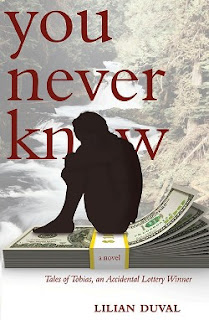 My guest today’s “A Book and a Chat” is writer “Lilian Duval”, I say writer as she is that not just an author, having been in the creative writing field for over thirty years before her now debut novel.

Being from French speaking parents then living in New York, Lilian explained to us during the show how there was some “issues” when she started school with her thick accent and pronunciation of some words. This however did not stop her love stories, and any third grader, who can compare the books in a library to houses on a street, with the shelves being the roads, obviously had a talent.

Lilian and her husband are survivors of 9-11, and we heard her story about how both she and her husband were workers in the first tower. Her husband should have been in a meeting at the top of the tower when the first plane hit, but had forgotten about the meeting. Such coincidences, or whatever you want to call them in a way leads us to Lilian’s debut novel “You Never Know”.

Anybody who lives around New York/New Jersey knows the phrase from Lottery, and how often have you heard somebody say “If only I could win the lottery”. Well the main character in “You Never Know” does just that…

About “You Never Know”

Tobias Hillyer had a promising future until a car accident claimed the lives of his parents.

Abandoning his dreams, he dropped out of college to take care of his orphaned, brain-damaged younger brother. Now in his late thirties, Tobias struggles to provide for his family, working dead-end jobs that fall far short of the academic career he had imagined.

Then he wins the New Jersey Mega-Millions! His financial worries eliminated, Tobias anticipates nothing but smooth sailing ahead for himself and the people he loves. But he soon finds that his amazing stroke of luck may threaten everything he holds dear.

Over peaks and valleys, this uplifting journey challenges everything we think we know about luck, life, and what we value most.

The book has received numerous great reviews from many readers, the one I like best and used on the show is…

Have you ever read a book you didn't want to finish because it was so good? You Never Know is a book to devour in one night, but also to cherish and read slowly. --Emily Truman, Esq., Assistant Municipal Prosecutor, City of Newark, New Jersey.

Lilian has a collection of short stories coming out next year in her book called “Random Act of Kindness”, but her writing does not stop there, as she is currently working on not one but two biographies.

You can find out more about my guest and their books at:
"Lilian Duval - You Never Know"