A Book and a Chat with Karen Simpson 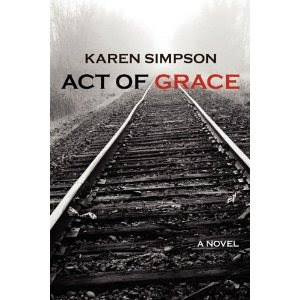 Karen Simpson is a quilting, CSI watching, foodie, in fact you can even find a wonderful recipe for George Washington Carver’s sweet black-eyed pea pie on her web page. Along with that, she is a fascinating lady and the author of a great debut book “Act of Grace”.

As we learned during the show Karen was destined to become a writer, her father even gave her a typewriter when she was around five years old. However it was many years later that Karen has now produced this great book.

Act of Grace is loosely based on an incident that happened several years ago in her hometown during a Klan rally. When what was supposed to be a nonviolent protest became violent, a young black woman saved a white man, who was simply wearing a confederate flag T-shirt, from being beaten by throwing her body over him. She got involved because she believed he had the right to his beliefs even if she and others felt he was wrong.

For weeks after the event people argued about whether she was a guardian angel or just crazy. I Karen’s opinion was that she was a compassionate and brave person, worthy of admiration and respect for living up to her values.

Five years after this rally as Karen shared with us, she had a very vivid dream about a young woman named Grace and during the dream she yelled out what is more or less the first line of the novel.

About “Act of Grace”

Act of Grace is the story of Grace Johnson a bright, perceptive African American high school senior who saves the life of a Klansman named Jonathan Gilmore. Everyone in her hometown of Vigilant, Michigan wants to know why. Few people, black or white, understand her act of sacrifice especially since rumor holds that years ago a member of the Gilmore family murdered several African -Americans including Grace’s father. Grace wants to remain silent on the matter but Ancestors spirits emerge in visions and insist she fulfill her shamanic duties by bearing witness to her town’s violent racial history so that all involved might transcend it.

Grace begins a journal, but she warns readers upfront that if they are looking for a simple or rational explanation for her actions then they need to look elsewhere. She knows that her accounts of her ability to speak to the dead, along with her connections to a trickster spirit name Oba, will be hard for most people to believe. With insight shaped by the wisdom found in African American mythology and the book, The Velveteen Rabbit, Grace recounts a story of eye-for-an-eye vengeance that has blinded entire generations in her hometown.

“This is Simpson’s first novel. It is a must read. Her poetic style of writing soothes you into the harsh realities of racism, violence, and absolute hate based horror. The hero, Grace, puts an end to historical and current race based violence by her own sacrifice–after learning much from her ancestors…Music and food are the backdrops of Simpson’s work: “better than sex” chocolate cake, red velvet cake, Nina Simone and John Coltrane. Simpson’s work is screaming to be a book club pick. That is why it is my book club selection for June. My theme? Tunes and food inspired by the novel.”

Yes even Karen’s food finds it ‘s way into her novel, this is her first novel but certainly not her last, so keep a look out along book shelves for more books by Karen Simpson.

You can find out more about my guest and their books at:
"Karen Simpson - Act of Grace"

Email ThisBlogThis!Share to TwitterShare to FacebookShare to Pinterest
Labels: A Book and a Chat, a must read, Act of Grace, African American, book for all, cakes, Hate, Karen Simpson, KKK, love, racism, trust