A Book and a Chat with Barbara Kyle 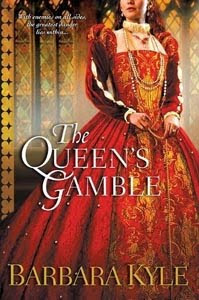 Living in a house where many of the book shelves are filled with Tudor historical fiction I was really pleased when I managed to get my guest booked for today’s “A Book and a Chat”. However when I delved into Barbara Kyle and her writing, I found a whole lot more than just historical fiction.

Barbara studied in a classical theatre program at the National Theatre School of Canada in Montreal. She had an acting career of twenty years acting mostly on television in made-for-TV movies, series, sit-coms, and soap operas as well as appearing in many stage productions throughout Canada and the United States. In many ways this theatrical background aided her when she started writing.

She had three thriller books published "Beyond Recall", "After Shock", and "The Experiment" where she used a male pen name of Stephen Kyle, as she explained on the show, she thought thriller novel might do better when under a male name, though after her subsequent success she is now re-releasing the books under her “Barbara Kyle” nom de plumb.

From this early success Barbara has gone on to find huge success in the historical fiction genre. Her “Thornleigh” series of so far four novels have sole over 400,000 copies.

Her first historical fiction novel, "The Queen's Lady" published in 2008 was a success! Two more novels followed: "The King's Daughter" and most recently "The Queen's Captive". These novels are set in Tudor England and feature fictional characters of the Thornleigh family manuevering the dangerous Tudor court. These have now been followed by "The Queeen's Gamble".

Whether it was her love of Shakespeare, thoughts of Lawrence Olivier in “Richard III” or an interest in Sir Thomas More Barbara’s writings about Tudor times and the rarified world of kings and queens has proved nothing but success.

A Barbra wrote about her Thornleigh series..

I love writing about the Tudor/Elizabethan period, whose "on the make" characters and life-and-death intrigues – to say nothing of the era's religious paranoia – speak deeply to our own time. I hope you'll agree, and will enjoy being caught up in the passions and setbacks, adventures and strivings of the Thornleigh family – Honor, Richard, Isabel, and Adam – as they befriend, and sometimes betray, their willful kings and queens.

This however is not all this great author has written, a new thriller “Entrapped” has also been published this year.

Set in Alberta, Canada, Entrapped is the story of Liv Gardner, an ambitious young oil executive intent on stopping farmer Tom Wainwright who is sabotaging her rigs after a spill of lethal “sour” gas poisoned his wife. Desperate to save the company she built, Liv plants evidence to frame Tom. But when the evidence is used to indict him for a murder, only Liv can save him.

With another three books in the Thornleigh series in the creative pipeline, the name Barbara Kyle will be one to follow and enjoy for many years.

You can find out more about my guest and their books at:
"Barbara Kyle - The Queen's Gamble"

Barry, it was a great pleasure chatting with you on your show. Thanks for the opportunity to reach out to your listeners and readers. Congratulations as you approach your 400th show!