A Book and a Chat with Chad Coenson 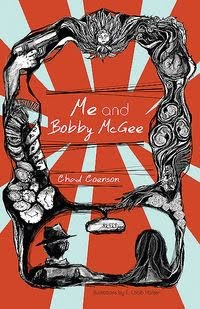 Humor has always been a way of putting over a point from the Greek philosophers to programs like British satirical puppet Spitting image add to those thoughts the words of the Monty Python Bruce’s Song “I drink therefore I am” . Take that and bend it around the lyrics of Kris Kristofferson song “Me and Bobby McGee” and you have the award winning novel of the same name by my guest Chad Coenson.

Chad has from an early age found putting over a point of view easier in the written word normally laced with humor, his travels have perhaps given him an insight into life that others do not have, and we heard during the show his sense of humor adds to both his views and his writing.

When you try and pigeonhole “Me and Bobby McGee” into a genre, it is like looking at the colors from a prism, “it all depends what angle you are looking at it from.” The book is full of humor, it is a thriller, it is satire and it’s even been called SC FI. The one thing that you will find is that the book is a masterpiece of comedic literature. Good enough to win the 2011 Independent Publisher Book Awards Silver Medal for Best Regional Fiction West-Pacific.

About “Me and Bobby McGee” (taken from Amazon)

Prepare to embark on a thrilling comedic adventure seen through the booze-blurred eyes of Keesey Cypher, a government-trained killer with an ill-fated abundance of classified memories who has since resigned himself to a regrettable existence, sipping away his tainted past. It is this powerful thirst coupled with Cypher's hunger for games of chance that leads him to New Orleans' coziest dive-bar the day after Fat Tuesday where one night of seeming misfortune leads to a frighteningly funny reality of subversive politics, corporate greed, backwards logic, and star (double)-crossed romance.

In this gripping social satire of modern times, Me and Bobby McGee pokes fun at the inane absurdities ingrained in our society, proving that freedom is truly subjective and karma is not just a philosophy, but a fate that is unwavering. And as an added bonus, for the careful reader and music fan, there are subtle connections throughout the novel to the classic folk song that inspired its title.

In a world of terrible truths and impending doom, find out what happens when the only man with the power to stop it... decides not to.

As one reviewer out it...

"There are several laugh-out loud moments; at the same time, there are moments which will make you ponder about life and its absurdities. It's entertaining and thought-provoking - a rare combination indeed." - Misha (My Love Affair With Books)

With a second book being planned the humor and satire promises to keep flowing from "Keesey Cypher" and his creator the guest on today's show "Chad Coenson".

You can find out more about my guest and their books at:
"Chad Coenson - Me and Bobby McGee"