A Book and a Chat with Stephen Brayton 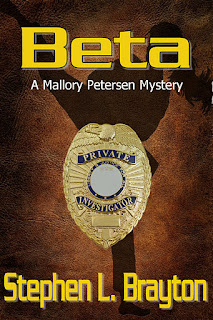 Stephen Brayton in an interview described himself as “This time traveling guy who flits around the universe in a British police call box. Usually he has a beautiful companion…” knowing he meant the one and only Dr Who, how could I not want an interview this author.

Stephen describes himself as a reader; a writer; an instructor; a graphic designer; a lover of books, movies, wine, women, music, fine food, good humor, sunny summer days spent hiking or fishing; and I'm a catnip drug dealer to my thirteen pound cat, Thomas. He is also a Fifth Degree Black Belt instructor in the American Taekwondo Association, which happens to be one belt higher than Mallory Petersen the hero of his book “Beta”.

Mallory Petersen, a Fourth Degree Black Belt and private investigator, who divides her time between instructing martial arts and taking on clients and cases that are…a little odd.

It's not that she wants bad things to happen to people, but it makes life more interesting when they do.

In “Beta”, Mallory accepts a case to find Cheryl McGee’s kidnapped eight year old daughter, she is pulled into the dark underworld of child pornography. The trail soon leads to the Quad Cities, where Mallory partners with an officer from the Special Case Squad.

As the investigation deepens, Mallory discovers there’s more to the girl's disappearance than her client let on.

This is actually the second book in the Mallory Preston series, the first book being “Alpha”, which is currently under re-write.

Along with the detective series, Stephen has also produced “Night Shadows”

Des Moines Homicide detective Harry Reznik and F.B.I. agent, Lori Campisi, have their hands more than a little full when they team up to investigate a series of gruesome murders.

With life throwing them one obstacle after another, the unlikely pair has no choice but to put their personal issues aside as they battle malevolent creatures from another dimension. With everything to lose, they have no one but each other to count on in a wicked game of survival.

With further Mallory Peterson books, a sequel to Night Shadows, a thriller with a woman who uses Army Ranger skills to survive in the woods after being attacked by four men, and possibly a romance novel, I am sure we’ll hear plenty more about “Stephen Brayton.

You can find out more about my guest and their books at:
"Stephen Brayton"