A Book and a Chat with Julia Karr 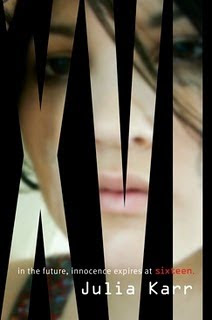 Today I host Julia Karr, my first guest from the 2K11 or 11’s group, this year’s group of debut YA authors.

Not only, was it a show full of laughter and enjoyment, but one where we learned a lot about Julia and her book “XVI”.

Julia learned to read at a very early age, thinking it unfair her sister could read but she couldn’t, not only that she even has a picture to prove the fact.

Writing poetry in her early days, and then some short stories for her young daughters, Julie developed into the writer that she is today once her daughter had grownup and she was able to concentrate on her writing.

The idea for a book came from a mental image she had of a girl one day. She was wearing earbuds, dancing down the street of a big city, trying not to be disturbed by the noise and the homeless man at her feet. Then when National Novel Writing Month (NaNoWriMo) started a week later, she decided to “meet” that girl and find out what her story was. It turned out to be XVI.

A much travelled lady, she shared with us some wonderful stories of her early days and her journey into becoming a published writer, including how she chose her agent. The way the book changed along the editing path and how some of the chapters almost wrote themselves.

"In the year 2150, being a girl isn’t necessarily a good thing, especially when your sixteenth (read sex-teenth) birthday is fast approaching. That in itself would be enough to make anyone more than a little nuts, what with the tattoo and all – but Nina Oberon’s life has taken a definite turn for the worse. Her mother is brutally stabbed and left for dead. Before dying, she entrusts a secret book to Nina, telling her to deliver it to Nina's father. But, first Nina has to find him; since for fifteen years he's been officially dead. Complications arise when she rescues Sal, a mysterious, and ultra hot guy. He seems to like Nina, but also seems to know more about her father than he’s letting on. Then there’s that murderous ex-government agent who’s stalking her, and just happens to be her little sister’s dad."

As well as learning about Julia’s work in progress and the possible follow up to “XVI” Julia also shared with us some tips for writing, some of which I am shamelessly stealing to share on this blog.

Excuses for not writing:


Writer’s block? I just don’t buy it. Write something, anything -- a list of your main character’s traits, a description of your story setting, reasons why certain plot points will or won’t work. Just simply write -- even if it sucks, eventually it won’t.


Uninspired? Take a walk and mentally write what you are seeing. Then when you get back home, write what you saw in relation to what you’re working on. So, you may be writing a Lost in Space book and you saw only gardens and lush growth - might your Main Character be homesick for something like that?


Your writing’s not good? Well, truth is, it won’t get any better if you don’t practice - which means write!


No one wants to read what I write. There are audiences for nearly every kind of story you can imagine. If you write, rewrite, edit, polish, find a critique group for help and support -- you’ll honestly discover whether what you are writing will find an audience. If you ultimately decide it won’t -- then write something else!

So sit back and listen to today's thoroughly entertaining show as I host today's "A Book and a Chat with Julia Karr".

Direct link to the show
"A Book and a Chat with Julia Karr".

You can find out more about my guest and his books at:
"Julia Karr - XVI"