A Book and a Chat with Jon F Merz 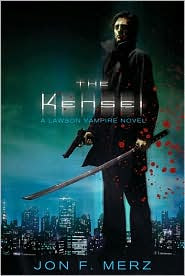 The life of author Jon F Merz who is my guest on today’s “A Book and a Chat”, can only be described as “interesting”. Being raised in Boston, the requirement for some sort of response to bullying lead him to study and then find the love of not only martial arts, but later major in Japanese and East Asian Studies.

This was followed by a spell in the United States Air Force, and later working for a private security, handling a wide array of assignments including executive protection and corporate investigations. Little did he know how those adventurous days would help him fuel his writing habit…

When he was fired for writing a novel and storing it on a work computer, that was the turning point in him becoming a full time writer.

Jon’s first published novels were the start of the “The Lawson Vampire Series”. The Fixer, was quickly followed by three others in the series, before he changed to writing "Jake Thunder Adventures". After this he was responsible for a whole load of Harlequin/Golden Eagle “Rogue Angel Adventures”.

Now the wheel has turned full circle as Jon has just released his latest, and the 5th book in the Lawson series “THE KENSEI”.

After several years, Merz offers a new novel (following Syndicate, 2003) starring vampire secret agent Lawson. This time, Lawson is in Japan on vacation. But trouble arrives almost immediately—on the train from the airport—when an assassin tries to take down a young Japanese man and his girlfriend. Lawson’s interference is more than just annoying, as the assassin he kills was a member of the local Yakuza, the Kensei, and now the Mob wants vengeance. When Lawson’s former KGB agent girlfriend arrives with troubles of her own, his vacation is no longer the least bit relaxing. All this sounds like the setup for a typical action adventure or espionage novel, but, of course, Lawson is a vampire who works for the vampire governing council, specializing in keeping vampires secret and fixing their problems. Other than being crazy strong and very quick to heal (excellent attributes for a secret agent), Lawson is more like Jason Bourne than Dracula, making this a vampire mystery with broad appeal. --Jessica Moyer

With a possible TV contract in the horizon, and further books in the pipeline, I am sure Jon F Merz is a name that we will hear a lot more of.

So sit back and listen to today's thoroughly entertaining show as I host today's "A Book and a Chat with Jon F Merz".

Direct link to the show
"A Book and a Chat with Jon F Merz".

You can find out more about my guest and his books at:
"Jon F Merz - The Kensie"