A Book and a Chat with David W Richards 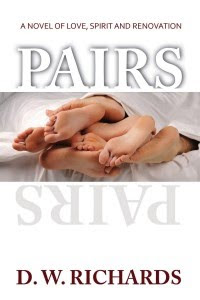 Stopping by for a chat today is David W Richards a member of the Canadian Authors Association and beyond being a novelist also a script-doctor and freelance writer. His book “PAIRS” is engaging and hilarious like a cross between Sex & the City and The Celestine Prophesy.

Unlike many authors he did not want to be a writer from early on, in fact was a bit of a class clown while at school, instead he got his Bachelor’s Degree in Psychology, and then took up accountancy.

The writing bug eventually bit with the result being his debut novel “PAIRS” a book that has been labeled “Woman’s Fiction”.

When asked why women’s fiction? his very short answser was: why not?

A less short answer is that he didn’t know that I had written a women’s fiction novel.

A slightly longer answer is...

Publishers and agents insist on knowing your genre since they often specialize in specific categories and have established networks and promotional templates. It wasn’t until after writing ‘Pairs’, that he began to think about readership, and he recognized everything had fallen into place for the story to be classified as a work of women’s fiction.

So what about PAIRS?

PAIRS is the story of Kayley and Adam, a single mom who makes her living writing greeting cards and a young carpenter; and Alexandra and Henry, a former stripper with dual identities and a math teacher with some unusual gender issues. The couples are connected through Henry and Adam, who are cousins, and through Kayley’s friend Helen, who is also Henry’s step-sister. As each couple builds a connection, the joint friendship turns into family. Kayley’s daughter, Terra, becomes a central focus of both relationships; she is loved and nurtured by the village that the couples create.

With the tightening of the bond between the couples, the mission for the pairs—which begins and ends with Kayley—turns to parenthood for Henry and Alexandra. The story weaves the elements of past sexual abuse, sexual dysfunction, problem pregnancies, and absolute devotion to family into a plot that draws the reader into the lives of these very unconventional characters...

We learned that this is not the end of the some of the characters in PAIRS, that David’s favorite character Alexandra will be the thread that will be there to lead the reader through several future books.

So sit back and listen to today's thoroughly entertaining show as I host today's "A Book and a Chat with David W Richards".

Direct link to the show
"A Book and a Chat with David W Richards".

You can find out more about my guest and his books at:
"David W Richards - Pairs"