A Book and a Chat with Dora Machado 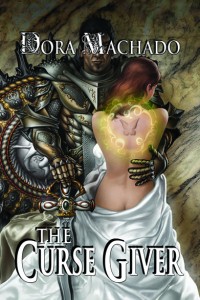 My guest today Dora Machado, is one of the few Latinas writing fantasy these days. Dora is the multiple award winning author of the epic fantasy trilogy “Stonewiser” series. She has now released a new novel “The Curse Giver”, which promises to be equally successful.

Born in America Dora grew up in the Dominican Republic, where she developed a fascination for writing and a taste for Meringue, before moving back to America where she now lives.

After a lifetime of straddling such compelling but different worlds, fantasy is a natural fit to her stories, something she has written with huge success.
Her first novel in the Stonewiser series “The Heart of the Stone”, won the 2009 Benjamin Franklin award for best debut novel. The second in the series “The Call of the Stone”, won the 2010 Independent Publishers Book Award's (IPPY) Gold Medal for Best Science Fiction/Fantasy book of the year. Both books were also finalists in ForeWord Magazine for Book of the Year in the Science Fiction and Fantasy Category. The third novel “The Lament of the Stones” has received equal success.

Her latest book is “The Curse Giver”, while meant to be standalone could well develop into another series with readers already clamoring for more about Lusielle.

About “The Curse Giver”: (taken from “Review from Here” blog)

Lusielle’s bleak but orderly life as a remedy mixer is shattered when her husband betrays her and she is sentenced to die for a crime she didn’t commit. She’s on the pyre, about to be burned, when a stranger breaks through the crowd and rescues her from the flames.

Brennus, Lord of Laonia is the last of his line. He is caught in the grip of a mysterious curse that has murdered his kin, doomed his people and embittered his life. To defeat the curse, he must hunt a birthmark and kill the woman who bears it in the foulest of ways. Lusielle bears such a mark.

Stalked by intrigue and confounded by the forbidden passion flaring between them, predator and prey must come together to defeat not only the vile curse, but also the curse giver who has already conjured their ends.

So listen now and share an interesting, and entertaining show as I chat with my special guest today on A Book and a Chat with Dora Machado

You can find out more about my guest and their books at:
"Dora Machado - "