A Book and a Chat with Stephen Beccia

Stephen John Beccia when previously on "A Book and a Chat" shared with us about his book “The Treelanders - Journey to the Giants” which was an award winner of iUniverse’s Publishers Choice, and Editor’s Choice. A musician for most his life, he started writing stories when he was ten, the first one being his version of Dr. Jekyll. 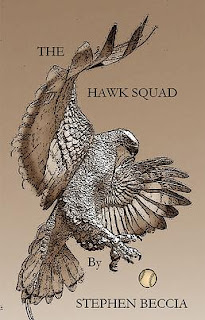 Stephen as well as his children's books also produces adult short stories, his list of novels and stories include Winter Chill, Seed of the Werewolf, White Room, Flying with Frank and Warning Sign.

Since last appearing on the show Stephen has produced a kindle version of “The Treelanders - Journey to the Giants”, and now a new novel entitled "The Hawk Squad".

About "The Hawk Squad": (taken from authors web site)

During the summer of 1977 while playing a friendly game of baseball, Dustin Baker gets himself into quite a pickle—a quandary involving his misfit friends, a brilliant hawk, and a distress note written by a girl they have never met. Throw some bad guys and bullies into the mix, and that’s one big fat pickle!

The Willabee kidnapping is the biggest crime Dustin’s town has ever experienced, and he stands in the heart of the beast. Unknowingly, Dustin and the Hawk Squad are about to play the greatest game of baseball ever played, both on and off the field.

The Hawk Squad is a fast paced story about a coming of age adolescent geek who finds the inner strength to triumph over one of life’s biggest challenges: being bullied. Unified with his group of misfit friends, Dustin Baker realizes he is not alone in his struggle against criminals at large. Despite taking his share of punches, jeers, and humility, a hero emerges to confront the biggest battle of his life.


As we heard through the program Stephen already has another four of the “Treelander” series on the way, with book two due out hopefully later this year.

So sit back and listen to today's interesting and entertaining show as I host "A Book and a Chat with Stephen Beccia".

"A Book and a Chat with Stephen Beccia".

You can find out more about my guest and their books at:
"Stephen Beccia - The Hawk Squad"