A Book and a Chat with Kristin Kuhns Alexandre 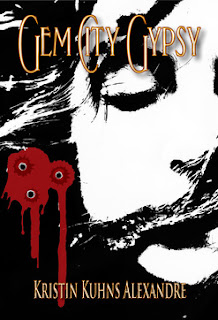 Kristin has been writing since she was a 16-year-old as a newspaper feature writer for The Kettering Oakwood Times in Dayton, Ohio. Her debut novel “Gem City Gypsy” is based on her graphic novel Nuncio and the Gypsy Girl in the Gilded Age (Runnymede Press). It is like an American version of Downton Abbey, based around her home town of Dayton, Ohio and the real story of America circa 1917-21.

The period between post-adolescence and adulthood – that time known as “coming of age” – can often be painful and confusing. For Neci Stans, a 19-year-old gypsy girl in pre-World War I Dayton, Ohio, the stakes are raised as she experiences first-hand an historic tragedy at sea and deadly bigotry at home.

In Kristin Kuhns Alexandre’s new novel GEM CITY GYPSY, Neci’s harrowing journey of self-discovery includes surviving the sinking of the Lusitania, witnessing the brutal murder of her master and mentor Lord Pool and facing down the ever-menacing Ku Klux Klan.

Alexandre first published Neci’s story in a graphic novel entitled NUNCIO AND THE GYPSY GIRL, which was narrated by an African Grey Parrot named Nuncio. The story is set on the eve of World War I in Dayton, which was regarded as the Silicon Valley of its day for its liveliness and industry. Neci, a strong-willed Gypsy princess, attempts to reinvent herself and move up socially. She wants to live a full, passionate life. She is in love with her childhood sweetheart, the aviator Ezra Crawford, who is ultimately engaged to the wealthy and beautiful Marlene Schiller. Ezra is also the son of Head Klansman Harold Crawford.

In 1915, celebrity writer Elbert and Alice Hubbard decide to make the Atlantic crossing on the Lusitania and Neci accompanies them as a servant, finding herself on deck when the ship is struck by a German torpedo. The Hubbards choose to go down with the ship, but Neci makes it to a lifeboat and survives. She spends two years as a housemaid to Lord Pool who schools her to be a proper lady. But Germans break into their Kinsale, Ireland home and murder her beloved master. Before Neci evacuates Ireland she steals Lord Pool’s lockbox filled with jewels and returns home under a false identity. Her life becomes more and more complicated; as she must confront her past and face the brutal stepfather she ultimately kills.

The book would understandably make a fantastic film something Kristin is eagerly pushing for. When you have reviews such as that from Vanity Fair shown below you can understand what a great book and hopefully film Gym City Gypsy is.

What a page turner! In breathless prose that's never less than highly entertaining, Kristin Alexandre takes her gypsy heroine on a dark journey from one rapacious benefactor to the next, until Neci Stans starts a rise to riches in the heart of the midwest that no reader will ever forget."--Michael Shnayerson, Contributing Editor, Vanity Fair

So listen now and share an interesting, and entertaining show as I chat with my special guest today on A Book and a Chat with Kristin Kuhns Alexandre

You can find out more about my guest and their books at:
"Kristin Kuhns Alexandre - Gem City Gypsy"