A Book and a Chat with Shamron Moore 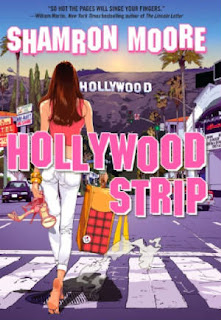 Today’s guest on “A Book and a Chat” is Shamron Moore (Shamron is a name is Israeli origin.).
Shamron left her home state of Michigan for Los Angeles in 2000 to pursue her showbiz aspirations. She quickly found success in international publications as well as nationally syndicated commercials. After numerous television and film appearances and being voted as one of the 100 Sexiest Women in the World, she left the industry to focus on writing, one of her lifelong passions.

They say write about what you know and in Shamron’s debut book “Hollywood Strip” she uses many of her own showbiz experiences making good her own dream of leaving Michigan hometown for the bright lights of Hollywood. Where for almost eight years, she worked as a model and actress, appearing in national commercials, international publications, TV shows, and feature films including "Zombie Strippers" with Robert Englund and Jenna Jameson.

Hollywood Strip gives readers a first-hand account of what goes on behind the scenes, when the camera isn’t rolling. There’s a lot of smoke and mirrors in the entertainment industry, and much of the goings-on are far from glamorous.

Hollywood, CA - Callie Lambert is a small town girl from Michigan. Sexy, beautiful, ambitious, and bored, she decides to pack her bags and trade that boredom for the excitement of Los Angeles.

Auditioning in her free time and working as a waitress to pay her bills, Callie relentlessly pursues her big break, taking every opportunity that comes up. Through a series of dramatic and scandalous events, Callie finally hits the big time as the lead in the film Nympho Cheerleaders Attack! and it feels like everything is coming together for her–until she runs into betrayal, jealousy, love, and murder. Quickly, Callie finds out that life as a starlet on the rise is not nearly as glamorous as she once imagined.

HOLLYWOOD STRIP is intended as the first of a series, with book two already written and is a novel I think that all will enjoy.

As one reviewer stated about Hollywood Strip…

“Does for Hollywood what Sex and the City did for New York, and the Boulevard of Broken Dreams will never be the same. So hot the pages will singe your fingers.”

So listen now and share an interesting, and entertaining show as I chat with my special guest today on A Book and a Chat with Shamron Moore

You can find out more about my guest and their books at:
"Shamron Moore - Hollywood Strip"