A Book and a Chat with Josepth Brady 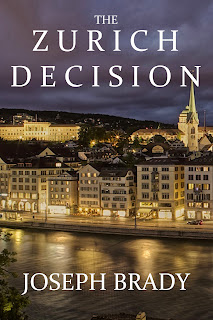 When Miami-based author Joseph Brady, wrote his first novel, "The Zurich Decision", he set it in Switzerland - even though he'd never set foot in the country. Then his wife was offered a job there, and fiction turned into reality

Joseph Brady is an American author who was born in Phoenix, Arizona and after working nearly ten years in the pharmaceutical industry, this multilingual author moved to the location of his debut book “The Zurich Decision” .

The reason he chose it as the prime location for the novel was because of its links to the pharmaceutical industry, however book like Joseph covers much of the world, an international thriller in the James Bond mode, with many interesting characters, including a Russian assassin.

About “The Zurich Decision”: (taken from Amazon)

Throughout his life, Chief Financial Officer Stephen Kastner was an honest man who helped run one of Europe’s most important pharmaceutical companies. Nevertheless, when his organization’s CEO deceitfully tells Stephen that he’ll be helping humanity by firming financing for the research of a new medicinal molecule, Stephen makes a dishonest business decision. His task is simply to arrange alternate financing for the research of this new drug. Unbeknownst to him, however, this new molecule is also highly addictive and potentially fatal. Stephen quickly learns that his decision was about more than medicine when his CEO orders him to organize a business meeting with an Iranian crime lord and a prominent Tokyo mafia boss. As the Zurich winter approaches, Stephen begins to regret his actions. Nonetheless, when one of his employees is murdered, Stephen realizes that it is too late to turn back.

As the business plan that Stephen inadvertently helped create begins to unfold, people around the world are dying from the illegal drug. In addition, the Russian assassin who murdered Stephen’s employee is now hunting him. While the mysterious compound gains popularity worldwide, Stephen finds his company under investigation by Interpol and the DEA. His life begins to unravel before his eyes. But it isn’t until an unimaginable personal tragedy occurs that Stephen must face the most horrific consequences of his actions. As a result of this event, he is forced to make one of the most important choices of his life as he attempts to lead himself on a potentially fatal path of redemption to stop the dreadful compound that he unwittingly helped create.

Though his debut book, Joseph already is building up a following, with a second novel already being penned  the name Josepth Brady will be one to look for on book shelves.

So listen now and share an interesting, and entertaining show as I chat with my special guest today on A Book and a Chat with Joseph Brady

You can find out more about my guest and their books at:
"Joseph Brady - The Zurich Decision"