A Book and a Chat with Miralee Ferrel 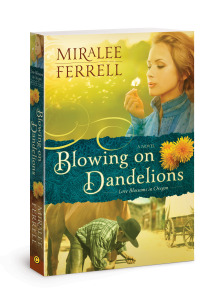 While Miralee Ferrell today’s guest on “A Book and a Chat” always enjoyed reading she never thought it would be calling for her. That is until one day, when in her fifties she attended an evening church service with a special speaker. At the end the speaker had a call for prayer, when Miralee went forward; they began to pray, and then suddenly stopped.  He told Miralee he believed God was saying she needed to write and it needed to be published.

Miralee went home, prayed about it, and felt a confirmation that this was indeed her calling, even though she had no idea what direction to go. Now, several years later, she writes because I love it and can’t imagine not doing so.

Her debut book was a contemporary woman’s fiction novel “The Other Daughter” and found almost instant success, and has since been followed by “Finding Jeena” the second in the series. After that early success Miralee got into her stride with the historical romance series “Love Finds You” series, all of which have been well received increasing the following of Miralee Ferrell.

Now a new historical romance series has been shared with her many readers, the “Love Blossoms in Oregon” series, of which the newly released “Blowing on Dandelions” is the first book.

About “Blowing on Dandelions”:  (taken from authors web site)

Katherine Galloway knew this moment of calm wouldn’t last, blown away like the dandelion seeds she scattered as a girl. In 1880, three years after her husband’s death, she struggles to run an Oregon boardinghouse and raise two girls alone. Things don't get easier when her critical, domineering mother moves in. Katherine must make the situation work, but standing up for herself and her family while honoring her mother isn't easy. And with a daughter entering the teenage years, the pressure on Katherine becomes close to overwhelming. Then she crosses paths with Micah Jacobs, a widower who could reignite her heart, but she fears a relationship with him might send things over the edge. She must find the strength, wisdom, hope, and faith to remake her life, for everything is about to change.

With further books in the series along with a new series for younger readers  already being planned the name Miralee Ferrell is a name that will continue to bring a smile to many readers faces.So listen now and share an interesting, and entertaining show as I chat with my special guest today on A Book and a Chat with Miralee Ferrel

You can find out more about my guest and their books at:
"Miralee Ferrel - Blowing on Dandelions"

Email ThisBlogThis!Share to TwitterShare to FacebookShare to Pinterest
Labels: Blowing on Dandelions, Book and a Chat, Finding Jeena, historical, Love Blossoms in Oregon, Love Finds You, Miralee Ferrel, Romance, The Other Daughter