A Book and a Chat with Christine Amsden 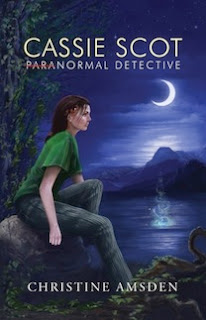 Award winning author Christine Amsden is my guest on today’s “A Book and a Chat”, she has been writing science fiction and fantasy for as long as she can remember. In fact she remembers writing her first short story at the age of eight which involved cabbage patch dolls going to Mars.

Always wanting to be a writer, her career got put on hold for a few years when at age of 16, Christine was diagnosed with Stargardt’s Disease, a condition that affects the retina and causes a loss of central vision. She is now legally blind, but that has not let this slow her down or get in the way of her dreams.

Her first book “Touch of Fate” was released in 2007 about a girl that can predict the future but is powerless to alter its course. This was the book was soon followed by the award winning Sci-Fi/Dystopian Thriller “The Immortality Virus” a fast paced science fiction tale set in an alternative reality.

While taking a break from writing after the success of “The Immorality Virus” the  hero of her new series “Cassie Scot: ParaNormal Detective” arrived one day.

As Christine says in her own words…

“Cassie came to me in mid-February, as I played on the floor with me (then) 9-month-old daughter. I won’t go so far as to say she popped into my head fully formed, but it was close. I sat bolt upright, my eyes probably doing that cartoon bulge, as a light bulb appeared over my head.”

Not just the idea for his first book, but the whole series (four so far) has since been written.

“Cassie Scot is the ungifted daughter of powerful sorcerers, born between worlds but belonging to neither. At 21, all she wants is to find a place for herself, but earning a living as a private investigator in the shadow of her family’s reputation isn’t easy. When she is pulled into a paranormal investigation, and tempted by a powerful and handsome sorcerer, she will have to decide where she truly belongs.”

As already shared, this is the first book in a four book series, something Christine shared about on the same blog…

"This is the first novel in a four-part series. Each book is framed by a mystery (helping it come to a stopping point, if not exactly a conclusion). The series is about Cassie herself – about a girl stuck in the middle, not sure who she is or what she is. It’s going to take all four books for her to figure that out, and a lot is going to happen to her along the way. It’s a coming of age story. A romance. And a lesson in learning to be yourself, instead of who you think you should be."

Already with many reviews praising this first book, I can see the series being a must read for people of all ages.So listen now and share an interesting, and entertaining show as I chat with my special guest today on A Book and a Chat with Christine Amsden

You can find out more about my guest and their books at:
"Christine Amsden - Cassie Scot: ParaNormal Detective."