A Book and a Chat with Michael Bigham 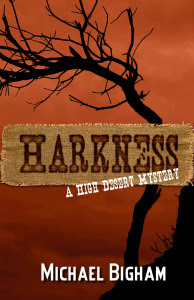 Michael Bigham is my guest on today’s “A Book and a Chat”, after several attempts to get him on the show, it was good to finally chat to this debut author.

Raised in the Central Oregon mill town of Prineville beneath deep blue skies and rim rock, Michael worked in a lumber mill and also fought range fires on the Oregon High Desert in his early years before he swung from being budding hippy to cop. He was a police officer with the Port of Portland then after leaving police work, he obtained an MFA degree in Creative Writing from Vermont College.

His debut book is “Harkness” the first in the “High Desert Mystery Series”.

Set in the early 50’s and although it’s a mystery, the book is also about Matthew Harkness’ perilous journey through life, how he reacts to murder in his county and tragedy in his own life.

Harkness isn’t your typical Western sheriff. Cowboy boots make his arches ache, he’s phobic of horses, but he does have a horse of sorts – a `39 Chevy pickup he calls Hoopie, and a sidekick – a neurotic wiener dog named Addison.

Harkness is a man of his times, shaped for both good and bad by his experiences in WWII. He deals with issues like bigotry and sexual suppression in a believable manner. We come to know him as a good man, but never a self-righteous one. The pursuit of justice is his job, and he’s good at it, but he never loses sight of where his next woman, or his next drink, is coming from. Harkness is the keeper of secrets in his little town and to solve the crime, he must decide which secrets to expose. One secret involves Judge Barnes, the county’s most powerful man. But Harkness had a secret of his own: he’s in love with the Judge’s wife. How much is Harkness willing to risk to catch a murderer?

Set on the Oregon High Desert in 1952, life in the small town of Barnesville has been easy-going for Matthew until a star-crossed teen-age couple disappears and he’s forced to deal with some horrific murders, one of which strikes very close to home, before finally confronting the killer man-to-man on the High Desert

The novel has brought forth reviews such as…

“Bigham has done an excellent job with his debut release. He has created a protagonist in Matt Harkness readers will want to visit with again and again.”

With the second in the series already underway I am sure we will hear more of “Harkness” and Michael Bigham.
So listen now and share an interesting, and entertaining show as I chat with my special guest today on A Book and a Chat with Michael Bigham

You can find out more about my guest and their books at:
"Michael Bigham - Harkness"