A Book and a Chat with K. A. Barson 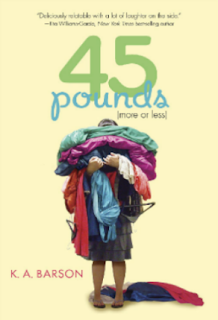 We have another one hour special on today’s “A Book and a Chat” as K.A.Barson or Kelly, a member of the Class of 2K13 is my guest. When you read about her addiction to peppermint chapstick and the fact she changes the color of her hair every 5/6 weeks you know that Kelly would be a great guest for “A Book and a Chat”.

Always a avid reader and writer, Kelly never thought that she could actually do it for a living, after all, wasn’t work something that was meant to be hard and boring, not getting paid to do something you liked?

In 2001 Kelly wrote her first novel, ignorant of the writing craft, it was at least the first steps down her literary road. This ignited the creative spark and she went on to learn the craft through various classes and groups and now not only is a writer but also teaches about writing as well, along the way winning several awards.

Her debut book “45 Pounds (more or less)" took five years to write, but the result has been well worth waiting for.

Sixteen-year-old Ann has a big problem. She has just two months to get into a bridesmaid dress for her Aunt Jackie's wedding. She needs to lose 45 pounds, which would be hard enough without the complications of a new job, a cute boy, a mean group of girls, and blended families that leave her caught in the middle-and left out. Her mother is obsessive about her own weight and as the summer wears on, Ann begins to see just how troubled her families are.

Telling the story in Ann's wry, realistic voice, this debut author effectively captures society's preoccupation with size and the resulting alienation of an overweight teen. With a chain-smoking grandmother whose language is peppered with "fat-ass," relatives and friends who are slyly disparaging about her weight, and a mother who constantly prods her about dieting, the message could be heavy-handed. But Barson lightens the tone with almost cinematic humor, ensuring that even the most painful scenes have a slapstick edge.
The ticking clock behind the wedding deadline gives the story real momentum, and while the ending is all nuptial jubilation, it is also a realistic summer's end for Ann.

Already chosen as Amazon Editor’s Pick for Best Teen Book of July, “45 Pounds (more or less) has been called “Deliciously relatable with a lot of laughter on the side.”  To me it is one of those “must reads” and I’m sure will be another large step down the literary road for K.A. Barson.

So listen now and share an interesting, and entertaining show as I chat with my special guest today on A Book and a Chat with K. A. Barson

Barry
Direct link to the show
A Book and a Chat with K. A. Barson

or you can download the mp3 file of the show from
"K. A. Barson"

Email ThisBlogThis!Share to TwitterShare to FacebookShare to Pinterest
Labels: 45 Pounds more or less, A Book and a Chat, Amazon Editor’s Pick, Class of 2K13, K.A.Barson, Kelly Barson, Must read, teen, weight, YA author, YA Debut author

Thanks for such a fun chat, Barry. A little laughter over coffee (or tea) always brightens a Saturday morning.