A Book and a Chat with Brenda Stanley 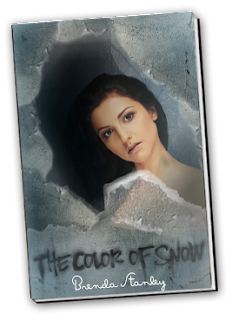 Brenda Stanley is my guest on today’s “A Book and a Chat” from being one of those quiet children she developed a career around communication. Be it as a news anchor and investigative reporter for NBC affiliate KPVI in Eastern Idaho to her latest novel “The Color of Snow”. Along the way she has won several rewards as well as bringing up five children including two sets of twins.

Her first dip into the published author pool was actually a cook books called “The Zucchini Houdini” originally written as a sort of “tongue in cheek recipe book after she overdid the Zucchini planting one year, but in the end became a well liked cook book for many readers. Brenda has another cook book coming out shortly.

This success was followed by a book she had written many years before but with the dust blown of it launched her as a novel writer of note, this book being “I Am Nuchu” a story of 17 year old half Ute Indian, it is a coming-of-age story about a teen wrestling with his identity as he finds himself caught between two drastically different worlds.

Brenda’s latest book “The Color of Snow” has already received many great reviews.

About “The Color of Snow”

When a beautiful 16-year-old girl named Sophie is found sequestered in a cage-like room in a rundown house in the desolate hills of Arbon Valley, Idaho, the entire community is shocked to learn she is the legendary Callidora--a baby girl who was kidnapped from her crib almost seventeen years ago and canonized in missing posters with portraits of what the fabled girl might resemble. Authorities soon learn that the cage was there to protect people from Sophie, because her biological father believes she is cursed.

Sophie is discovered after the man she knows as Papa, shoots and injures Damien, a young man who is trying to rescue her. Now, unsocialized and thrust into the world, and into a family she has never met, Sophie must decide whether she should accept her Papa's claims that she is cursed and he was only trying to protect others, or trust the new people in her life who have their own agendas. Guided by a wise cousin, Sophie realizes that her most heartbreaking challenge is to decide if her love for Damien will destroy him like her Papa claims, or free her from past demons that haunt her mind.

It is a book that covers many themes from Mental illness, and teen pregnancy to religious intolerance and racism. Though classed as YA it is a story that has been enjoyed by people of all ages, just check her many reviews…

I want more! The tension begins on the first page. From the very beginning the author has created a scene that leaves so many questions. I would read and think I had answers to some of them only to find out that I didn't quite have it right. In the beginning I wanted to really dislike the man she had always known as her father. As I read I realized that even he was not black and white. As I was read his past I really disliked Sophie's grandfather. The fact that he really thought that his family was better than Luke's family because they raised sheep and worked for him made me dislike him. There are so many things going on here. There are family secrets, issues with social class, as well as a difference in religious beliefs. Was there really a curse on Sophia's family as she believed?

As well as “The Color of Snow” Brenda also has another novel “Like Ravens in Winter” just out, this time it’s about a television network reporter (hmm who could that be based on….) who is assigned to Iraq at the beginning of the Gulf War. Looks to me like another hit for this great author.

So listen now and share an interesting, and entertaining show as I chat with my special guest today on A Book and a Chat with Brenda Stanley

You can find out more about my guest at:
"Brenda Stanley - The Color of Snow"

Email ThisBlogThis!Share to TwitterShare to FacebookShare to Pinterest
Labels: A Book and a Chat, Brenda Stanley, I Am Nuchu, Like Ravens in Winter, The Color of Snow, The Zucchini Houdini, YA author

Barry, thanks so much for featuring Brenda!